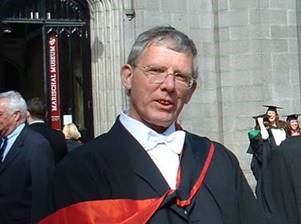 Remembering Dr Frank Bowser-Riley, former Senior Lecturer in Medical Sciences, who passed away in December 2020 at the age of 76. This is a reflection on his enthusiasms and life as an academic before he joined the University and during his time here from 1986 to his retirement in 2010.

Dr Frank Bowser-Riley was a consummate thinker and educator of himself and those around him. He was born in Manchester and moved to Cheshire at the age of eight. He earned a scholarship to attend Sandbach School, but had to leave early after his father died. He moved to Buxton to be with his mother and worked as a Lab Technician in the Devonshire Royal Hospital, his first scientific job. During this time, following on from being in the Cadets at school, Frank joined the Manchester Regiment of the Territorial Army, a part of his life that had a profound and lasting impact.

Subsequently, his hard work at the Paediatric Research Unit at Guys Hospital, whilst also attending night classes, meant that he was able to gain admission to Southampton University where he studied and obtained a BSc degree in Physiology and Biochemistry. A Masters degree in Neurophysiology followed at the Royal Dick Veterinary College in Edinburgh, where he won the James Tindall Scholarship which allowed him to complete a PhD in the same field.  Frank greatly enjoyed his time at the Dick Vet where he found great stimulation from those around him.  While completing his PhD, Frank took on the role of demonstrator assisting in the teaching of undergraduate students, his first taste of being an educator in a formal sense.

Frank later moved to Oxford University where, working for the United States Navy, he researched deep sea diving and the effects of anaesthetics.  This provided an opportunity for travel to the United States as well as visits to other parts of the world, even spending time aboard the USS Nimitz.  During this time, Frank also began his first forays into the developing world of computing.

Coming to work at the University of Aberdeen in 1985 was something of a culture shock with its one departmental computer on a trolley.  However, within a few years Frank, along with others, had developed innovative teaching using new technology for which they were awarded the IBM United Kingdom Prize for Information Technology.

While at Aberdeen, Frank continued his work on deep sea diving, at times travelling to conduct research with Russian colleagues and, on one occasion, returned with a polished titanium vodka flask which had been fabricated on a Russian nuclear submarine!

As time progressed, Frank’s work interests moved further into teaching and the development of IT infrastructure to support it. As an extraordinary visionary in a world where the internet, as we now know it, was still very young and when there were only a small handful of websites around the world, Frank set up the first one to showcase the Department of Biomedical Sciences.  He also created an intranet in the Department and then repeated this exercise for the new Institute of Medical Sciences following the move there from Marischal College in 1996. Frank’s skills and insight into the use of IT approaches for both teaching and research was, without question, highly significant in the Department becoming one of the leaders in Biomedical Sciences in the UK.

Frank was always a proponent of fairness to do with everything from quality control of marking at the University to becoming the School Disability Officer and an advocate for the promotion of gender equality.

Many have commented that Frank was a terrific mentor to early career researchers and many will smile as they think of him, in his own manner, wisely and robustly defending evidence-based discussion and sound decision-making. Thousands of students, over the decades, will remember him as an inspirational teacher.  Those who witnessed it will never forget him eccentrically striding towards them over the benches of the Arts Lecture Theatre!

Frank relaxed into his retirement but remained a polymath. He didn’t slow down so much as use the time to further diversify his interests.  Among them art, which had always been important to him. He was able to spend more time enjoying this and spending time with his wider family. He will be sadly missed but not forgotten.

Frank is survived by his wife Susan and son Alexander.