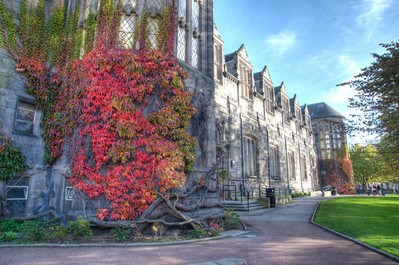 The University has recently made four key new appointments.

Professor Martin Meyer will be joining as Head of the Business School from the University of Kent, where he is currently Dean of Kent Business School.

Well-known for his work on science, technology and innovation, as well as university-industry-government relations, and with more than 150 publications to his name, Professor Meyer will bring a breadth of experience to his new role. As one of the first social scientists exploring nanotechnology, Professor Meyer has also advised or worked for a number of international organisations and national agencies, including the European Commission, the UK Engineering and Technology Board, the Finnish National Technology Agency and the Royal Swedish Academy of Engineering Sciences.

Professor Meyer, who moves to Aberdeen later this year, said:“I believe business schools can play a strong role at the heart of the university, reaching out to other disciplines and becoming a hub, bringing together entrepreneurs from academe, business and society at large to effect positive change. I feel this resonates strongly with the foundational purpose and the ethos of the University. This is why I am so delighted to join Aberdeen as one of the great universities this country has.”

A familiar face to many, Professor Siladitya Bhattacharya, will take over as Head of School of Medicine, Medical Sciences and Nutrition.

Professor Bhattacharya, who took over the role on July 1, said: “It is a great privilege to be able to lead the School of Medicine, Medical Sciences and Nutrition. I am excited about working with a talented group of colleagues to deliver outstanding teaching and research which makes a real difference to people’s lives. I would like to make sure that the School offers an environment where staff and students feel supported and are able to achieve their full potential.”

Another well-known colleague Nick Edwards will take up the permanent role of Head of Student Support with immediate effect. Nick has been undertaking the role on an interim bases since August 2018 and in that short time has made the role his own.

Nick said: “I’m delighted that I’m continuing in this role and will be able to help the amazing staff within our various Student Support teams in meeting the ever evolving needs of our diverse student population, in Aberdeen and further afield.

“I look forward to working with colleagues across Student Support, our campuses and Schools and thank everyone for their support during my acting up appointment.

Garry Fisher will join the University as Head of Health, Safety and Wellbeing from September 1, 2019. Garry joins us from Essex County Council where he was Corporate Health and Safety Manager. He has also held similar posts at the London Boroughs of Enfield and Newham.

Garry said: “My wife and I have enjoyed holidays in Scotland over the last couple of years and enjoyed them so much we decided to make the move north.

“I am very much looking forward to starting at the University in September. My wife and son will joint me later.”