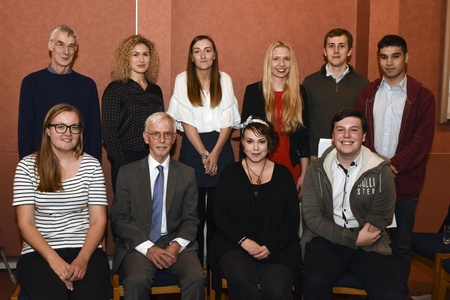 Ten undergraduates from the University of Aberdeen have been recognised for excellence at the Principal's Scholar Awards 2016/17.

In a formal ceremony on 17 October 2017, which nine of the recipients attended, the students were congratulated for their academic excellence or outstanding contribution to the University. The recipients were nominated by their School and presented with a certificate by the Senior Vice-Principal, as well as a receiving a one-off bursary funded by Ede & Ravenscroft, the University’s Robe Suppliers.

Talking of the Scholar Awards, the Principal said: “I would like to express my sincere congratulations to all of our scholars. Each of you has demonstrated real excellence across a wide range of subjects and have, in many cases, contributed to the wider endeavours of our University. Your achievements are wonderful and as a University we are very proud of you and wish you the best of luck in the future.”