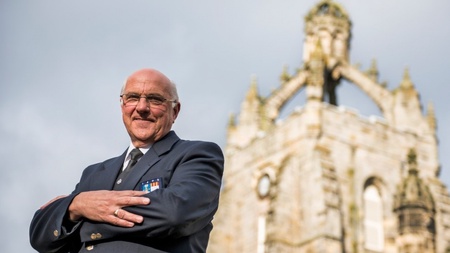 Staff at the University of Aberdeen are preparing to bid farewell to a 'weel kent' face, as Stan Jack retires at the end of October after 16 years as University Sacrist.

The retired police officer took up the role after a 30-year career with Grampian Police, much of which was spent as a road collision investigation specialist.

As Sacrist, Stan estimates that he’s gowned between 25-30,000 students at 256 graduation ceremonies, not to mention the countless couples he has helped tie the knot at King’s College as part of his duties.

Stan’s association with the University goes back over 40 years, when Old Aberdeen was part of his beat while stationed at Tillydrone Police Station in his early years with the force.

After moving into roads policing he teamed up with staff in the School of Engineering to develop training for officers involved in collision investigation, and it was through his links with the University that he learned of the opportunity to succeed former Sacrist Bob Black, who retired in 2001.

“At that time I had no idea what a Sacrist did, so I came along, had a coffee and a chat with Bob, and from there I knew that this was something I could get involved with,” he said.

“The University was desperate to get a new Sacrist in before graduations, so in my second week I found myself working at the first of many graduation ceremonies, which was a baptism of fire to say the least.

“Deep down I was panicking because I didn’t want to make a mistake and foul up the whole thing, but I ended up thoroughly enjoying it and have done ever since, because it’s such a happy, family occasion.”

As the role of Sacrist expanded, Stan was given responsibility for security and arrangements for major events, including when the Scottish Parliament sat in session at King’s College in 2002, which included the small matter of an official visit from the Queen.

I always feel that any manager is only as good as the team he has behind him, and I've got an excellent team who will go out of their way to help " Stan Jack

Another milestone was to follow in 2012 when the University hosted the British Science Festival, an event that Stan looks back on with pride.

“When the advance organising team visited the University I sensed that it might take a bit of persuasion for them to come this far, but we were blessed with great weather, and when Aberdeen is sunny, this campus sells itself without any effort.

“I could sense that our chances were improving as I took them around the campus, and when we were told we had been chosen I was absolutely delighted.

“When the Festival was held here there was a real party atmosphere, and even though it was an awful lot of work for the team we did a great job. The feedback from everyone involved was really favourable, and I took a great deal of satisfaction from the event being such a big success.”

Reflecting on his time as Sacrist, Stan said that he could “fill a book well worth reading” with tales of forgotten wedding rings and ‘runaway’ brides, to graduation mishaps and comical student protests.  But it’s the camaraderie that he admits he will miss the most.

“There’s no doubt I’ll miss the staff here, because there are so many different sections that I work with and even though I work with some more than others, if I’ve ever asked anyone for advice or help I’ve always got it.

“I always feel that any manager is only as good as the team he has behind him, and I’ve got an excellent team who will go out of their way to help - that’s how we always get the job done.”

Despite his impending retirement, Stan is planning to keep busy through his involvement with the Retired Police Officers Association, as well as his new role with the Burgesses of Aberdeen, one of the oldest civic institutions in Scotland.

He’s also hoping to maintain a link with the University as an external invigilator during exam periods, subject to one condition. “The only stipulation is that if I’m going on holiday, the University can’t say no!”