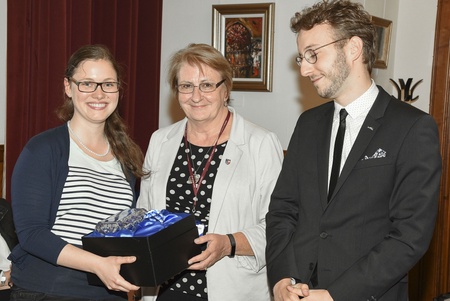 The third volume of a popular University of Aberdeen student-led journal has been published.

The latest edition of the Elphinstone Review was launched at an event that took place on Thursday, June 1, in the Linklater Rooms.

Named in honour of the University’s founder, the Review invites students to submit scholarly essays across a wide range of subjects, primarily in the arts and social sciences, providing an opportunity to showcase the research talents of undergraduates.

This year’s editor-in-chief, Nicolas Paul, who was supported by deputy editors Agnieszka Gronwald and Isabella de Souza, said the third edition saw a substantial increase in submissions from students.

I am delighted to hear of exciting plans to develop the journal over the coming year, and I look forward to seeing it enjoy continued success in the future" Professor Margaret Ross

“We are delighted that the amount of submissions to the Elphinstone Review has doubled on last year, which is testament to its growing popularity.”

“Competition for publication was intense, and the result is a finished product that showcases twelve superb essays that are of an extremely high standard.”

Professor Margaret Ross, Head of the College of Arts and Social Sciences said: “Our undergraduate students produce work of outstanding quality and the Elphinstone Review provides a platform for them to showcase this academic excellence.”

“This year’s Review has been the most popular yet, which is indicative of the hard work of the editorial team in firmly establishing the journal since the first edition was published in 2015.”

“I am delighted to hear of exciting plans to develop the journal over the coming year, and I look forward to seeing it enjoy continued success in the future.”