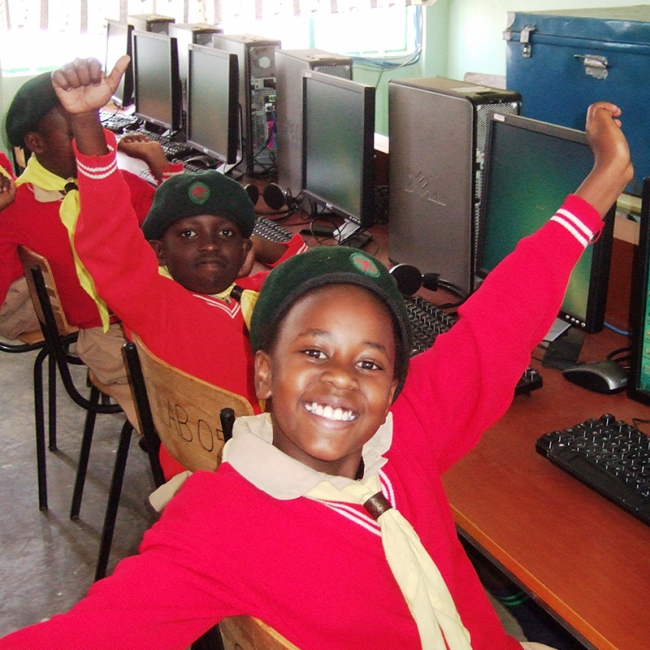 The University of Aberdeen has been supporting disadvantaged families and children both locally and further afield.

Families and youngsters have been enjoying increased access to information technology thanks to the University which continues to donate computers to under privileged children in Scotland and Africa.

As part of the on-going relationship with Reusing IT, a Scottish charity, the University has sent around 350 computers to Kenya, Sierra Leone and Ghana, where they are now used in community schools, orphanages and primary health projects.

A recent shipment of 100 computers to Kahuho Academy, Niarobi, South West Kenya, saw the school kitted out with the PCs.

Recent donations also include PCs to the local Aberdeen charity, the Foyer, to help support their work in supporting independent living in the North East.  Also, Syrian refugee families in the region have also received a donation as part of a wider council initiative.

To keep pace with the ever-changing world of IT, the University replaces 25 percent of its computer stock annually in order to ensure it meets the high demands of research, teaching and our students.

But the PCs no longer suitable for the University’s computer suites are far from obsolete, and as such the University teamed up with Scottish charity, Reusing IT, to make sure that those in disadvantaged areas can still benefit from the systems.

The University of Aberdeen is at the forefront of Scottish Universities in terms of technology charity." Ross Cockburn, Trustee, Reusing IT

Brian Henderson, Director of Information Technology at the University of Aberdeen, says, “We have a Technology Renewal Programme in place to ensure we have state-of-the-art facilities for students and staff.

“However, this does not mean the machines are redundant – just that they cannot necessarily take advantage of the very latest applications needed in our environment.

“It is great to see equipment that we can no longer use being given a new lease of life and helping community and volunteer-run projects in vital areas such as health and education, which would not otherwise have access to this kind of technology.”

Ross Cockburn, a Trustee of Reusing IT added, “The University of Aberdeen is at the forefront of Scottish Universities in terms of technology charity.

“These computers were originally bought for educational purposes and they have years of use left and should continue to be used for education rather than being destroyed.”

Before computers can be reissued for use, secure auditable data destruction is carried out to ensure any confidential or sensitive information is deleted when equipment is donated.