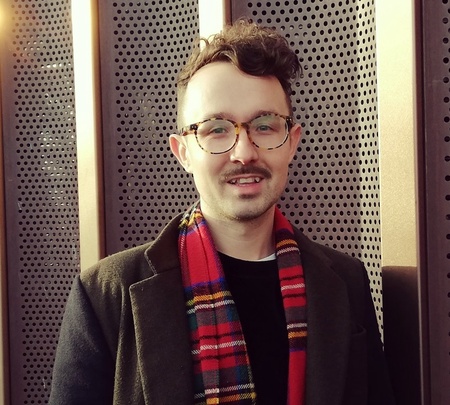 LGBTQ alumni Dr Kevin Guyan discusses his research into Scotland’s 2022 census and the collection of gender, sex and sexuality data.

Imagine looking at a detailed illustration of society but failing to see yourself or anyone who resembles your life or experiences. Imagine sitting in class every day listening to the register but never hearing your name called. Imagine learning about the past but only being told about individuals who were powerful and privileged. Sadly, for many people, the feeling of being excluded is not hard to imagine. This is why initiatives like LGBTQ History Month are important as a response to the erasure of people from the historical record who identified in ways that broke norms about gender, sex and sexuality.

I work as a Researcher in Edinburgh and, after graduating with a MA in History and International Relations from the University of Aberdeen in 2011, went on to complete a PhD in History before embarking on a career in equality, diversity and inclusion research.

My current research explores what happens at the intersection where data meets identity, with a particular focus on the collection, analysis and use of data as it relates to LGBTQ people in the UK. In societies that are historically designed to marginalise LGBTQ people and ensure their lives and experiences remain hidden in the shadows, data can offer a path to improve the visibility of LGBTQ people and ramp-up calls for greater recognition.

Thinking differently about gender, sex and sexuality at the University of Aberdeen

My time at the University of Aberdeen was formative in encouraging me to think critically about the relationship between identity and power in contemporary contexts and throughout history. I grew up in Aberdeen and have fond memories of my undergraduate courses on histories of gender, sex and sexuality in Greco-Roman and Byzantine societies as well as how these concepts informed events in International Relations. Courses introduced me to the work of scholars such as Michel Foucault, Judith Butler, Thomas Laqueur, Cynthia Enloe, David Halperin and Sara Ahmed. For someone not from a particularly academic family, the ideas expressed in their works blew my mind and made me think differently about how the world operated.

In 2011, keen to continue my research but take a break from Aberdeen, I moved to London to study for an MA in History at University College London. I had found my passion and devoted my energy to studies of masculinity in twentieth-century Britain. I was able to secure funding and decided to continue at UCL to study for a PhD, which examined the relationship between concepts of masculinity and the design of social housing in the decades after the Second World War. Since finishing my PhD in 2016, I have worked for a higher education organisation on research related to equality, diversity and inclusion for staff and students in universities and colleges.

Although the focus of my studies might seem disparate (from Byzantine eunuchs through to twentieth-century architecture and the testing of census questions), a common thread runs through my work: how identities shape the world around us and, in turn, how we are changed by the world in which we live. Whether this is the design of housing blueprints or the design of census questions, there exists a reciprocal relationship between structures and individuals. As something that claims to hold a mirror up to society for us to see ourselves but partly constructs the very thing it claims to describe, Scotland’s 2022 census is only the most recent iteration of this interest.

The 2022 census and data about LGBTQ people in Scotland

The landscape of data about LGBTQ people will radically shift in the coming years as the 2022 census will ask everyone in Scotland aged 16 and over, roughly 4.5 million people, to share information about their sexual orientation and whether they identify as trans or have a trans history. The census, postponed by one year due to the covid-19 pandemic, marks the first time in Scotland’s history these questions are asked.

Although improving, the quality of data that currently exists about LGBTQ people in Scotland is patchy. For example, in Aberdeen, the Scottish Government has estimated that around 1.3% of adults identify as LGBO.[1] Lower than the Scottish national average of 2.6% and than estimates for other major cities including Edinburgh (5.4%), Dundee (4.8%) and Glasgow (4.0%). The Scottish Government’s findings mirror those from the Office for National Statistics. Research from 2016 found that, across the UK, 2.5% of the population identified as LGBO (this equated to approximately 1.3 million people).[2] The Scottish Surveys Core Questions does not currently collect data about Scotland’s trans population.

Although efforts to improve the breadth and quality of data about LGBTQ people are often well-intentioned, the collection of ‘more data’ about LGBTQ people will not (on its own) improve people’s lives and experiences. For example, there is little value in being ‘counted’ if the person or organisation responsible for the count chooses to depict you in a negative light or in a way that invites further discrimination, harassment or violence. In this instance, individuals might prefer to remain ‘uncounted’. Among the diversity of identities that fall under the LGBTQ umbrella, we also have to critically consider who is brought into focus and who is kept hidden through the practice of data collection exercises. In Scotland’s next census, for example, politicians voted to keep the sex question as binary (with the response options ‘Male’ and ‘Female’), therefore forcing people who identify as non-binary to identify as either ‘Male’ or ‘Female’ in the census.

Events at the intersection of data and identity characteristics are often more nuanced or complicated than they might first appear. While recognising the many potential positives that can come from being counted, I hope that my research invites us to pause and not simply settle for any sliver of recognition whether it is during LGBTQ History Month or how LGBTQ people are counted in the census.

I believe that data about LGBTQ people is only meaningful when it inspires action that changes people’s lives for the better. During my time at the University of Aberdeen, I came to understand that dealing with things only in the abstract was not my passion. I wanted to think about how we could apply theory to things happening in the here and now. As data about LGBTQ people becomes a topic of increasing interest, I hope that my research can inform the work of campaign groups and ensure that ‘being counted’ improves visibility, recognition and justice for LGBTQ people.

Dr Kevin Guyan (he/him/his) is a researcher and writer whose work explores the intersection of data and identity. He is the author of the forthcoming book Queer Data: Using Gender, Sex and Sexuality Data for Action, which examines the collection, analysis and use of data related to LGBTQ people in the UK.

Kevin has recently published an article in the Journal of Gender Studies on the design of the sexual orientation question in Scotland’s 2022 census, which is available to download for free.