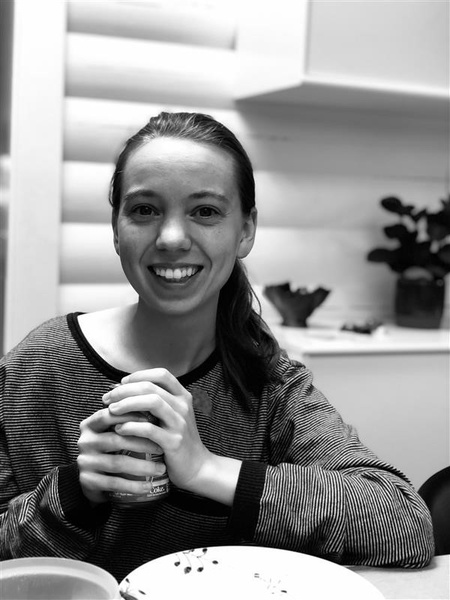 I graduated from the University of Aberdeen with an MA in Sociology (2019) and an MRes in Social Science (2020), and I am now doing a PhD at UCL in Gender & Sexuality Studies and Hebrew & Jewish Studies focusing on lesbian, bi, and queer Jewish women’s lived experiences in Israel and England.

Many LGBTQ+ people have experienced overt or covert LGBTQphobia in religious spaces. Some have been subject to comments like ‘G*d doesn’t like people like you’, ‘it’s Adam and Eve, not Adam and Steve’, and ‘you’re going to hell’. Other people, such as myself, experience invisibility and silence. I never saw myself or people who reflect my relationships. I never realised the impact of silence until I went to a Shabbat service in Tel Aviv in 2019 (after I had attended Pride in Jerusalem the previous day), and the rabbi openly talked about same-sex couples, LGBTQ+ families, and marriage equality. For the first time in a religious space, I was present. I was represented. That was also the moment when I decided to pursue my PhD.

Religion and sexuality at the University of Aberdeen

I’m a first-generation university student. After I completed my IB I decided to move to Scotland since I could do courses in sociology, anthropology, and religious studies. My undergraduate courses introduced me to a new world. I still remember my first-year sociology lecture on gender and how I sat on the edge of the seat. Terms like gender performativity, democratic relationships, and sexual scripts sparked my interest. Yet, it took a while before I found a way to combine religious studies and social science. I found the religious scriptures and traditions intriguing, but I wanted to understand contemporary lived experiences.

The sociology department gave me space to explore – especially during my Master’s degree. I ambitiously did a cross-cultural qualitative study where I interviewed progressive rabbis on how they on make synagogues LGBTQ+ friendly. I also did a quantitative project on correlations between gender and experiences of antisemitism. Originally, I had been invited to continue my work with the rabbis for my dissertation, but due to COVID-19, synagogues were not open. Instead, my literature-based thesis provided the basis for my PhD. I was fortunate to secure ESRC funding for my PhD, which I started at UCL in September 2020.

Other than my work on sexuality and Judaism, I have a great interest in Holocaust studies. My mother started teaching me Holocaust history when I was 11, so we’ve shared this interest for almost 15 years. She has read a lot about Jewish and Polish experiences and I about LGBTQ+ experiences. As such, the common thread of my research is the connections between gender, sexuality, and religion. It’s about how these identities shape, and are shaped by, cultural, interpersonal, and reflexive encounters and scripts – and how these scripts then affect our everyday lived experiences. In that respect, I was never solely interested in theorising and writing papers – I want to work with the communities, mediate conversations in religious and LGBTQ+ spaces, and assist with educating members on equality, diversity, and inclusion.

When I got asked to write this piece, I spent some time thinking about what to discuss. I could talk about how LGBTQ+ religious people often feel they have to choose between their sexuality and religiosity, and the mental health effects of this. I could discuss traditional religious views on non-heterosexuality. I could talk about the Leviticus verses that condemn male anal sex (18:22 and 20:13) and the contemporary interpretations of these verses. I could engage with the conversation on how relationships and sexuality now are different than in biblical and Talmudic times. For the purpose of LGBTQ+ History Month, it is more important to me to engage with inclusion initiatives since many know less about this. In other words, I hope to show that many religious institutions have moved from asking if you can be religious and LGBTQ+ to how you can religious and LGBTQ+.

One of the assumptions I often encounter from people when I say what I research is ‘but… religious people think it’s a sin to be LGBTQ’. I remember telling someone on my Master’s course that I had interviewed a lesbian rabbi, and they replied ‘wait… you can be a female rabbi? And a lesbian rabbi?!’. LGBTQ+ inclusion in religious spaces is not new. Most of us just haven’t learned about it.

The Jewish LGBTQ+ Group (formerly known as the Jewish Gay Group) was the world’s first Jewish LGBT organisation. It was established in London in 1972. One of its primary aims was to advocate for ordaining LGB rabbis. The first openly gay rabbi, Allen Bennett, was ordained in the US in 1978. Two years later, Lionel Blue became the first openly gay rabbi in Britain. Then, in 1989, rabbis Elli Tikvah Sarah and Sheila Shulman became the first lesbian rabbis in Britain. There are now more than twenty LGB rabbis in the UK.

There have been notable developments in Liberal and Reform Judaism. In 2005, when civil partnership got legalised, they introduced a blessing ceremony. While the word ‘marriage’ was not used, the Hebrew word for marriage, נִשּׂוּאִין (nissuin), was because most cannot read Hebrew. These movements actively participated in the Equal Marriage Campaign too. Recently, they have introduced gender-neutral pronouns and terms of the ketubah (marriage contracts).

Prayer books have also changed. Liberal and Reform Judaism have included the matriarchs in their prayerbooks for decades. The next step is to make the prayers LGBTQ+ inclusive. Here, some rabbis draw on Siddur Sha’ar Zahav, which is an American LGBTQ+ prayer book that has prayers for, for example, non-binary Jews and coming out.

There are no designated LGBTQ+ synagogues in the UK – unlike in America and Canada. There are, however, numerous LGBTQ+ friendly and welcoming synagogues. Many of these hold Pride Shabbat in June to mark Pride Month and they also mark Trans Remembrance Day and World AIDS Day. Whilst these days provide a platform to discuss, remember, and engage with LGBTQ+ matters, it is important to note that these prayers and conversations are not exclusive to those days. Every conversation about relationships and family must be inclusive. Some also offer B-Mitzvah, a gender-inclusive ritual, rather than only Bar/Bat Mitzvah. Within Conservative and Orthodox Judaism, there is also evidence of changing attitudes towards LGBTQ+ individuals.

During LGBTQ+ History Month, it is important to remember the progress that has happened. These changes did not happen overnight. It took decades to be where we are now. And many continue to experience overt and covert anti-LGBTQ+ sentiments in religious spaces. As such, there is much more to be done. Assumptions and prejudices about faith and sexuality must be addressed. Silence, which is just as important as explicit LGBTQphobia, must be dealt with. I hope that my research can be a valuable contribution to the Jewish community.

For information on support and services available to LGBTQI+ students at the Univeristy of Aberdeen please visit our Support and Wellbeing pages.