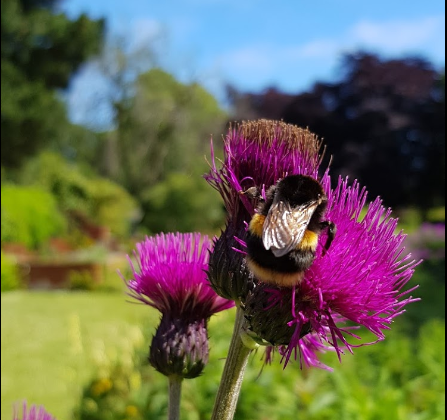 Spring is here! And if you’re like me, you’ve thought, “I need to try gardening”. Not just because you feel like a hobby-less hermit but also because you’ve heard it can be quite rewarding to grow something from seeds (especially if you can eat it). However, you probably have also found yourself lost in the utterly endless amount of gardening blogs and been incredibly intimidated by the sheer number of missteps that you can take. Now, any hobbyist gardener could tell you it’s not as simple as (seed + dirt + water = plant), but you sort of, secretly hoped it would be. No, it really is a science, even at the personal garden level, and that is why we have dedicated plant and soil scientists.

What do these scientists do? Well that’s as big a question as they come because, if you haven’t noticed, there are so, so many plants. Generally speaking, they are scientists concerned with the cataloguing, care, preservation etc. of the world’s plants, the study of their evolution, the soil they grow in, the ecological impact of their presence or absence, and what all that means for the trajectory of our planet as a whole. They are amazing scientists with a venerated history stretching back centuries. Today, as they have done in centuries past, they play a vital role in the establishment and maintenance of botanic gardens.

Such gardens have existed across Europe for several hundred years and have served as centers of education and scientific discovery for much of that time. Medicine in particular has gained significantly from the establishment of gardens that grew, and made available, herbs and other plants that led to medicinal remedies. In the times that they opened to the public, they have offered a green escape from city life and the awe-promoting experience of seeing plant species from around the world, especially to those unable to leave the cities themselves. In the 21st century, these gardens still play many of these same roles but have also taken on the enormous responsibility of conservation through practices like seed banking and education surrounding the loss of biodiversity. Here in Aberdeen, we are lucky to have just such a garden, the Cruickshank Botanic Gardens, on the northern border of the Old Aberdeen campus. I have had the opportunity to pour over its history within Aberdeen along with the dedicated individuals tasked with its care. The current curator of the garden, Mark Paterson, is the first to hold that position since the mid-80s. Whilst researching this piece, I was able to glean some of Mark’s personal accomplishments and ambitions which served as a wonderful tour through some of the UK’s botanic gardens. I’ll start with a few key points in Mark’s life as they relate to botanic gardens.

Mark’s father, Allen Paterson, was also a plant scientist and was the last live-in curator for the Chelsea Physic Garden in London. Mark spent his early childhood there whilst his father maintained the hidden gem along the banks of the Thames, which dates back to the late 17th century. The garden’s unique position there affords it a microclimate suitable to growing things you wouldn’t dream of attempting in a normal UK climate. Most notably, the senior Paterson was able to cultivate a crop of olives that weighed in at 7 pounds (3.2 kg)! Apparently, they tasted awful though, so we weren’t subjected to any UK-grown olive oils on our grocery shelves. The family Paterson then crossed the Atlantic to tend the Royal Botanical Gardens in Ontario, Canada. The RBG is Canada’s largest botanic gardens and home to a significant amount of research on plant life, training many aspiring plant and soil scientists. Mark seems to have been called to carry on in the same profession as his father, studying plant science and taking on several positions at botanic gardens throughout the UK. Two notable positions were within Royal Botanic Gardens, Kew, and the Eden Project in Cornwall.

The Gardens in Kew were founded in the mid-18th century and are now home to thousands of species of plants, 1500 just in the beautiful Temperate House, which is the world’s largest Victorian glasshouse. Conservation efforts at Kew are extensive but notably include the Millennium Seed Bank, home to over 2.3 billion seeds, representing over 39,000 different species, and a key part in preserving the genetic history of Earth’s flora.

The Eden Project in Cornwall is truly a sight to behold, something that seems just as well suited to grace the landscapes of a terraformed Mars. The main attractions at the Eden Project are the massive glass domes that house the world’s largest rainforest in captivity and other miniature ecosystems. From these gardens throughout the UK and Canada, to our own in Aberdeen, we’ll go on a quick tour of the Cruickshank Botanic Gardens history and Mark’s place in it.

A brief history of the Cruickshank Botanic Gardens

The gardens sit on the northern border of the Old Aberdeen campus, with its main entrance on the Chanonry. This area of Old Aberdeen was home to the chaplains and canons – hence the name “canonry or chanonry”- that worked within St. Machar’s Cathedral. Maps from the mid-17th century show gardens on the site of the current botanic gardens.

The Cruickshank Gardens were formally founded by the gift of Miss Anne Cruickshank, in memory of her brother Dr Alexander Cruickshank, in 1898. The first “Keeper of the Garden” was James W.H. Trail, Regius Professor of Botany at the University. Trail took on a young assistant, John Davidson, as curator. The University appears to have had a collection of specimens, known as an herbarium, prior to the establishment of the Gardens. Davidson’s role appears to have been the curation of this collection as well as demonstration within botany, but he is likely to have also had a role in the Gardens themselves. Davidson went on to establish herbariums and live sample collections for the newly established University of British Columbia in Vancouver, Canada, drawing on inspiration from Aberdeen and Kew. Successive Regius Professors of Botany at Aberdeen seem to have taken on the role of Keeper of the Garden and maintained them with the help of curators, head gardeners and other support staff throughout the 20th century. During WWI and WW2, the garden was repurposed to grow vegetables to support war efforts. The garden expanded in the 1960s through to 1980 under the direction of curator Noel Pritchard, who retired from the role in 1985. Mark Paterson is the first curator since Pritchard’s retirement.

Mark took on the role of curator in 2012 and has been making concerted efforts to revitalize the gardens and local interest in it. He has done some lovely work to reach out to the community, offering educational sessions and tours of the garden, even in the pandemic. His most recent tour can be viewed here: https://youtu.be/d_DjyFj9zGQ . Mark has also collaborated with local distillery, Porter’s Gin, whose founders are University of Aberdeen alumni, to make a commemorative gin for the Uni’s 525 anniversary. Mark put his expertise into selecting botanicals to flavor the gin, one for each of the Uni’s five centuries. Overall, from what I have seen of Mark’s work and quotes from him, he seems quite keen to bring his own passion and love of plants to the University and wider Aberdeen community.

Plant scientists like Mark hold a unique and important place in the world, cataloguing its horticultural and botanical knowledge for current and future peoples. They leverage this knowledge not just to maintain sprawling grounds but also to maintain us as a species, reminding us of the delicate ecological balance that we all too often run afoul of. But also, less existentially morose is the plain fact that they do present us with the opportunities to see plants we would have never dreamed of seeing. For me, no holiday to a major city is complete without attending their botanic gardens. Not only are they filled with these exquisite plant specimens but the buildings and grounds themselves are often architectural marvels and cultural institutions worth a trip. They represent an often-overlooked calling that resonates with us as humans and that is the tranquility and gentle joy that we find in being amongst plants. For all the money, dirt-caked hands, and overwhelming frustration that comes with trying to start a garden, there is still an unequivocal delight in seeing those first seedlings break through the surface and reach themselves skyward. It reminds us to do the same because, despite feeling firmly stuck in the ground (as I’m sure many of us are), we are instead planted with sunnier days ahead.

The entire gardens are now open daily from 9am – 7pm following the easing of lockdown. Follow the link here: https://www.abdn.ac.uk/botanic-garden/visiting/ for more information on how to enjoy the gardens.