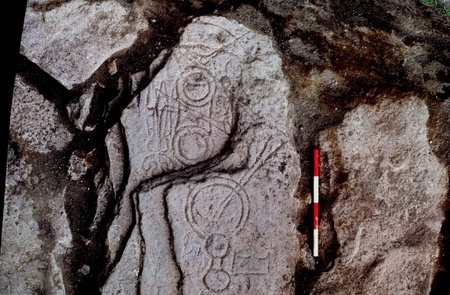 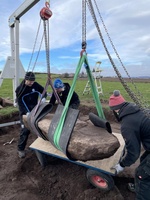 A fundraising campaign has been launched to conserve a newly discovered rare Pictish symbol stone and to fund its future redisplay.

Archaeologists from the University of Aberdeen unearthed the stone from a field near Aberlemno in Angus in February.

It is one of only a handful ever discovered during excavation and the archaeologists came upon it while digging a test pit for surveys to try and build a greater understanding of the important Pictish landscape of Aberlemno.

The site is thought to be of great Pictish significance and is near one the assumed site of a battle which led to the creation of what would become Scotland - the Battle of Nechtansmere when the Picts defeated the Northumbrians allowing a powerful Pictish overkingdom to be established.

The University archaeologists have teamed up with the Pictish Arts Society to launch a crowdfunding initiative to allow conservators to clean the stone, remove biological growth and fill the open joints of one side of the stone where natural bedding plans provide weaknesses that may delaminate over time.

They will now work with stakeholders to see if the stone could be displayed outdoors and close to its findspot.

Professor Gordon Noble from the University of Aberdeen led the excavations. He said: “Our hope is that the stone can be displayed outdoors to maximise opportunities to see it but this will depend on condition of the stone once conservation work has taken place.

“Another option would be to work with museum and curatorial bodies to identify a suitable indoor location.

“The 1.7metre long Aberlemno stone is a truly remarkable find which could make a significant contribution to understanding the significance of Aberlemno to the Picts.

“It has multiple Pictish symbols on it including a mirror, comb, double-disc and Z-Rod, Crescent and V-rod and triple ovals, part of a symbolic system that the Picts may have used to represent the identities of powerful rulers or individuals of status.”

John Borland, Chair of the Pictish Arts Society added: "The discovery of any new Pictish sculpture is always cause for excitement - even more so if it has rare or unusual features.

The 1.7metre long Aberlemno stone is a truly remarkable find which could make a significant contribution to understanding the significance of Aberlemno to the Picts" Professor Gordon Noble

“The new Aberlemno stone has just that.  One set of symbols - a crescent & V-rod and double-disc & Z-rod, accompanied by a mirror & comb - overlies an earlier set featuring a triple oval and a very large V-rod, apparently on its own and unusually set on its side.

“This stone has an unusual story to tell and the Pictish Arts Society is delighted to be working with Professor Noble to secure its future."

The fundraising campaign can be supported at https://www.crowdfunder.co.uk/p/aberlemnostone