Following in the footsteps of Charles Darwin again, but in a different archipelago this time...
04 July 2020 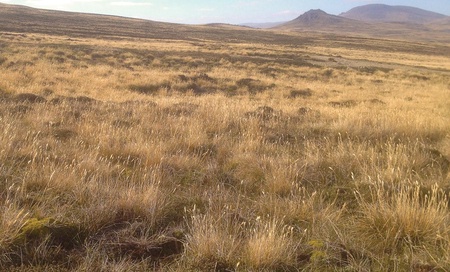 Dmitri Mauquoy and David Muirhead have been awarded £230k by The Leverhulme Trust to work on a project entitled “Falkland Island peatlands as a mirror to understand future European peatlands”.

Peatlands are valuable ecosystems which take up and store carbon, mitigating the effects of climate change by taking greenhouse gases out of the atmosphere. For millennia they have captured CO2 from the atmosphere and locked it away as peat. Since the last ice age these peatlands, particularly the enormous peatlands across North America and the Russian Federation have helped cool our climate, but fires can reverse this effect, rapidly returning carbon to the atmosphere as CO2.

One of the consequences of recent climate change and human disturbance is that peatlands are now becoming more fire prone due to drainage, higher summer temperatures and reduced precipitation, which creates a water deficit. This water deficit is set to continue into the near future based upon climate model predictions (reduced summer rainfall and longer fire seasons). Given these more extreme future conditions for peatland carbon sequestration, in order to understand how carbon accumulation in Northern Hemisphere peatlands may likely change in the future, it is useful to look at how carbon accumulation varies in modern day ‘extreme’ peatlands (located at the limit where peatlands can develop). One area of the world which fits this space for time approach is the Falkland Islands.

The results of a pilot study show that peatlands in the Falkland Islands have frequently burnt:

Given this, it will be possible to investigate the relationship between the frequency, extent and intensity of burning (based upon Raman Spectroscopy analyses) and the amount of carbon stored in these peatlands over a range of timescales (decades, centuries and millennia). These Southern Hemisphere peatlands could then provide clues to how Northern Hemisphere peatlands may sequester carbon into the future.

We are due to undertake fieldwork in February/March 2021, so with a bit of luck it will be possible to travel there by this time… Here is a picture of a ‘whitegrass’ peatland in the Falkland Islands…we will (ahem) try and take some ‘snappier’ images when we get out there.