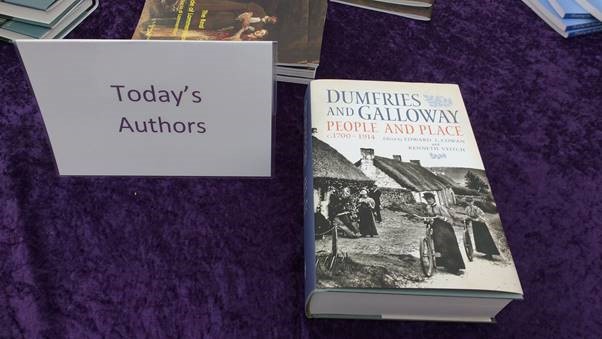 Dumfries and Galloway People and Place c1700 – 1914, published by Birlinn, was launched at the Wigtown Book Festival – firmly established as one of the UKs premier literary events. Dr Lorna Philip, who contributed a substantive chapter to this volume, attended the sell-out event in the Wigtown County Buildings on the 6th October. Lorna’s chapter documents a period in rural Scotland’s history marked by profound agricultural, industrial and demographic change.  Her contribution, Population growth and the development of towns and villages in Galloway, 1755 – 1841, draws upon sources including Webster’s Census of 1755 and entries in the Old and New Statistical Account  of Scotland alongside a novel analysis of the entries for Galloway parishes recorded in 1841 Census enumeration books (record of c75,000 individuals!).