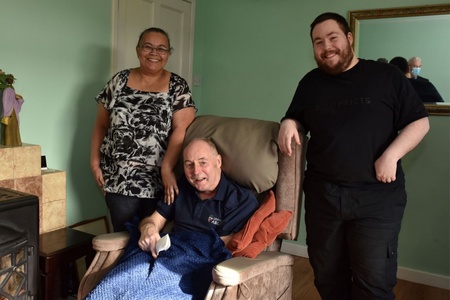 A member of the Estates & Facilities team has joined an elite group to have notched up more than 50 years long service with the University of Aberdeen.

Donald McPherson, 66, was presented with a commemorative quaich and certificate in honour of his half century of service during an informal ceremony at his home in Aberdeen watched on by his proud family, including wife Sandra and son James.

Donnie, as he is better known, followed in his father’s footsteps when he started out at Duthie Farm in July 1970 as a young apprentice. After three years learning a multitude of practical skills he became a pig stockman, a post he stayed in for around a decade before moving up to feedmill operator.

In 1995 he transferred to the small animal unit at the Rowett Research Institute and was an integral member of the team for the next five years, before being appointed to the role of gardener and handyman in 2000.

When the Rowett merged with the University of Aberdeen in 2008 Donnie stayed on. Seven years later he transferred into the Estates & Facilities department as a trade’s assistant, aiding and supporting both mechanical and electrical engineers in their various duties.

For the past seven years he has been tasked with various health and safety critical maintenance duties.

But it is in other ways that Donnie has really made his mark. Always the first to offer a helping hand, from offering assistance to international students finding their feet and leading team-building walks up Ben Nevis and the Lairig Ghru, to charity fundraising to buy equipment to support disabled youngsters in the North-east, his friendly demeanour and willingness to ‘get stuck in’ and be a part of the University community has made him well-known and liked by both staff and students alike.

It was partly in recognition of this that in 2002 Donnie and Sandra were selected to represent the Rowett at the Queen’s Garden Party.

Looking back, Donnie summed up what he was most proud of simply as: “My long service and the friends that I made.”

Donnie, who was diagnosed with a brain tumour in November, was presented with his quaich by Robert Philp, Deputy Director of Operations and Maintenance Manager Atholl Murray.