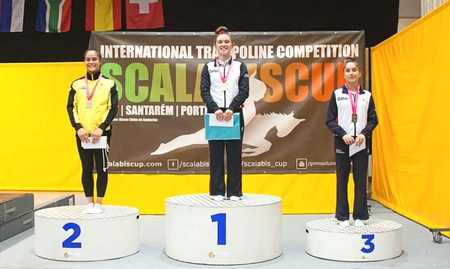 An engineering student from the University of Aberdeen has a spring in her step after scooping an individual and team gold medal at a major international gymnastics event.

Kim, who was representing Great Britain, was up against stiff competition from around the world, including teams from Canada, Spain and Portugal. Nonetheless, she won her individual final by a margin of 1.300, beating Spain’s Melania Rodriguez Muñoz, while helping Great Britain claim a team gold.

Her win in the competition follows recent success in the classroom, where she won The Peter McConnell Memorial Prize as the best 3rd Year Electrical and Electronic Engineering student, at the School of Engineering’s annual prize-giving ceremony.

Speaking about her Scalabis Cup success, the Banchory Trampoline Club member said: “This competition is one of many trials to make the British team for the World Championships in November, so my main aim was to go out and hit the required standards set for us.

“The level of competition is high and a good way to gauge your progress internationally at this point in the competition season.

“I have recently been learning a new skill, and this was the first time I had the chance to put it into practice.  Even though I was nervous I feel so much more confident now knowing I can do it well in competition.”

Kim added: “Winning the final individually was really unexpected as the final was full of some really talented girls who I look up to! Taking gold with the Great Britain team was also a great experience for me.”