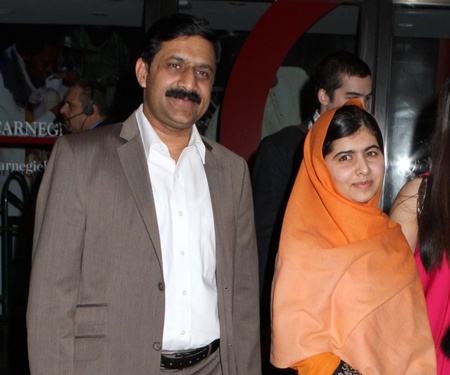 The father of the youngest ever Nobel Peace Prize winner Malala Yousafzai, who was shot by the Taliban for campaigning for the right of girls to be educated, spoke about his experiences of his daughter's struggle in a recent visit to the University of Aberdeen.

Ziauddin Yousafzai visited the University to promote his new book ‘Let Her Fly’ at the invitation of the Aberdeen Student Parliament, a student-led society.

Students, staff and members of the public gathered in the Kings College Conference Centre to hear Ziauddin talk about Malala, 21, who was shot by the Taliban in 2012 after speaking out for the right of girls to be educated in her native Pakistan in a BBC blog.

Following the attack, Malala became a symbol of the fight for female education across the world, earning her the Nobel Prize Peace Prize in 2014, as well as a place at Oxford University.

Mr Yousafzai, who is now a United Nations special adviser on global education as well as being the educational attaché of Pakistan at its embassy in Britain, told the story of his life, activism and the profound impact Malala has had on female empowerment and the role of education worldwide.

It was a joy and honour to talk to the students and hear from them." Ziauddin Yousafzai

Following the event, attendees had the opportunity to get pictures with and copies of the book signed by Mr Yousafzai.

Ziauddin tweeted: ‘Well done Aberdeen Student Parliament! It was a joy and honour to talk to the students and hear from them.’

He added that the Student Parliament was hoping to continue to attract high-profile speakers in future.