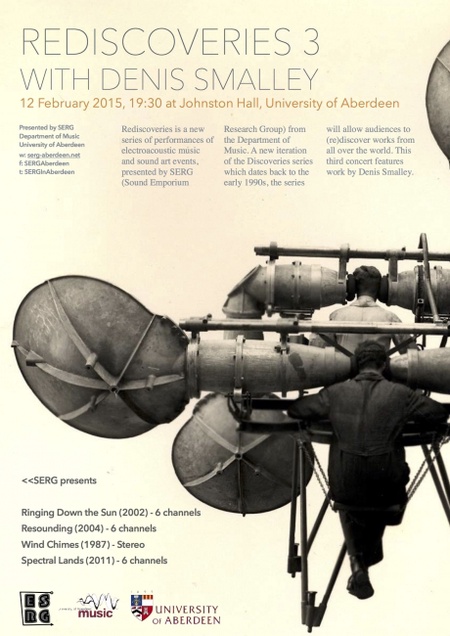 Denis Smalley, an internatioally renowned composer and scholar of electroacoustic music, was invited to give a performance of his work at the 3rd Rediscoveries, electroacoustic music series organised by SERG (Sound Emporium Research Group), on teh 12th of February at Johnston Hall, University of Aberdeen.

Spectral Lands (2011) came across to me as a real journey across a colourful and wide-ranging sound landscape. Once again the variety, intense colours and metamorphoses over time of the sounds created by Smalley were wonderfully compelling and I respect that he has allowed me to react to them in my own way." Alan Cooper

In its third installment, Rediscoveries III was the most successful electroacoustic concert, drawing a large audiece from the music students, university members, SERG members, and general public, who thoroughly enjoyed the concert.

On the next day, Smalley gave a masterclass to three student composers—Luca Nasciuti, Beatrice Dawkins, and Mark Dunsmore—which was followed by a workshop on space-form in electroacoustic music.