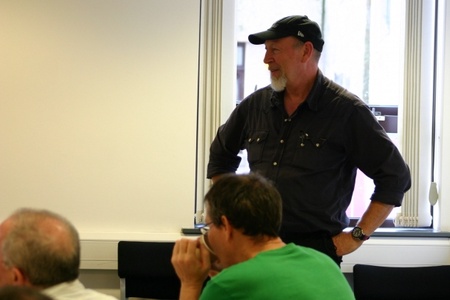 Richard Thompson, founding member of the 60s folk group Fairport Convention, Grammy-nominated recording artist and Ivor Novello Award ran a masterclass at the University on songwriting over the weekend of 27-28 September.

On the Saturday, after giving the group a “nuts and bolts” introduction to the art of songwriting, he set them a task overnight, to compose a song, or part of a song, using only three chords, on the subject of something which had had a significant emotional impact on them. On the Sunday, the songs were workshopped and the group benefitted from feedback and advice not only from Thompson but also from each other. It is hoped that the songs will performed in full at an event at the University in the near future.

The delegates were treated to a one hour gig from Thompson on the Saturday evening, featuring some of his best known recordings, including 1952 Vincent Black Lightening and Who Knows Where the Time Goes.