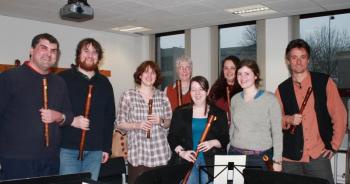 Red Priest is the only early music group in the world to have been compared in the press to the Rolling Stones, Jackson Pollock, the Marx Brothers, Spike Jones and the Cirque du Soleil. This extraordinary acoustic foursome has been described by music critics as ‘visionary and heretical’, ‘outrageous yet compulsive’, ‘wholly irreverent and highly enlightened’, ‘completely wild and deeply imaginative’, with a ‘red-hot wicked sense of humour’ and a ‘ break-all-rules, rock-chamber concert approach to early music.’

The group's cellist, Angela East, took Bach's six suites for unaccompanied cello to various parts of the University, including the Chapel, Zeste and the Atrium at IMS.  She joined the harpsichordist Howard Beach in coaching various baroque ensembles in the university, two of which used the original Ruddiman eighteenth-century violins owned by the University.  Piers Adams, the dynamic recorder player in Red Priest, coached Cantores ad Portam, the University's recorder consort.