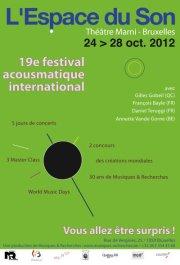 BMus graduate Louise Rossiter, who specialised in Acousmatic Composition during her degree has been awarded joint first prize in the prestigious L'Espace du Son 2012 competition held in Brussels. The award is for the successful performance of a number of pieces of acousmatic music over a large loudspeaker diffusion system in front of a jury and audience. Louise beat of competition from a number of countries and her winning performance included a diffusion of Pete Stollery's piece Shortstuff along with music by Gilles Gobeil.

Louise graduated in 2010 and went on to study at University of Edinburgh with Robert Dow where she gained an MMus in Composition with Distinction. She is currently undertaking a PhD at De Montfort University with John Young.