A military piper on the Victorian stage
12 April 2022 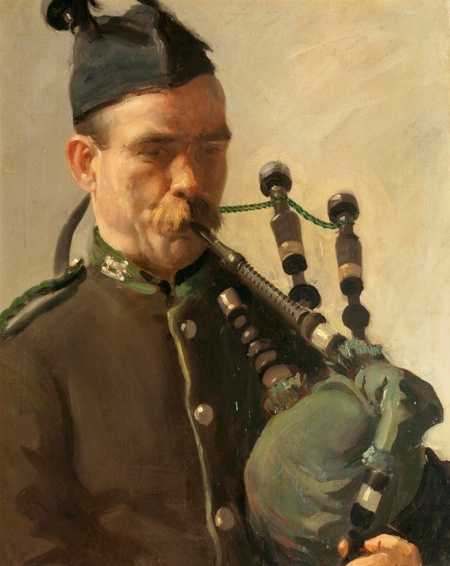 Lecturer in Music, Jo Hicks, discusses a regimental piper at London's Alhambra music hall as part of a conference on nineteenth-century theatre.

Jo is the co-convenor of the London Stage and the Nineteenth-Century World conference https://www.new.ox.ac.uk/london-stage-and-nineteenth-century-world-iv , which was recently held for the fourth time at New College, Oxford (April 6-8, 2022).

Jo’s talk was entitled “Sergeant Piper Findlater and the Coloniality of Pathos” and addressed the career of George Findlater of the Gordon Highlanders, who was famously awarded the Victoria Cross for playing on while wounded at the Battle of Dargai Heights in 1897 (part of a larger campaign for command of the Khyber Pass trade route). The tune Findlater reportedly played at Dargai, “The Haughs o’ Cromdale,” had been included in the first volume of James Hogg’s Jacobite Relics of Scotland (1819) and its text tells of Highland soldiers fighting government forces. Clearly the music’s associations were no impediment to its use in the service of imperial violence (in this case inflicted on members of the Afridi tribe who were attempting to regain control of their hereditary lands in the Tirah region). Findlater’s subsequent London stage career—in which he re-enacted the performance that earned his celebrity at venues such as the Alhambra—underlines the extent to which the Great Highland bagpipe could be accommodated into popular Victorian narratives of British military gallantry. While it is hardly a revelation that pipers were active in the army at the height of empire, the significance of this activity for the repertory and reputation of the instrument bears closer scrutiny. The practice of composing tunes to commemorate battles may have predated the conscription of the Great Highland bagpipe into the British army, but it certainly continued thereafter and, unsurprisingly, there is a tune still in circulation named “Heights of Dargai.” At the same time, globetrotting musicians such as Findlater inevitably influenced a range of localised military piping practices, many of which persist to this day. Jo argued that the case of Findlater hints at how the pathos of solo piping, so often deployed as a marker of Scottish identity, was equally suited to performance in the theatre of imperial war.