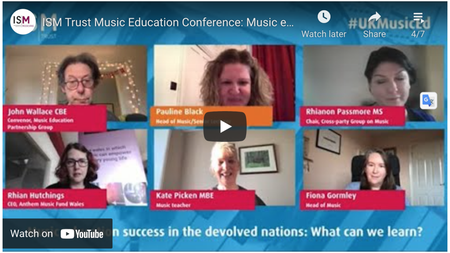 Head of Music at the University of Aberdeen, Pauline Black, was a lead contributor to the ISM's 'Where to Next for Music Education?' virtual conference held on 27th November 2021.

Pauline Black, who is the recently appointed Head of the Department of Music within the School of Language, Literature, Music and Visual Culture at the University of Aberdeen, was at the forefront of a major online conference for music educators on 27th November 2021. 'Where to Next for Music Education?' was hosted by the Incorporated Society for Musicians (ISM), which represents performers, educators and other music professionals across the United Kingdom. The event was attended by over 500 delegates, and included sessions on early years music, the future of music in England, legal essentials and the panel session which Pauline hosted, which was 'Music education success in the devolved nations: What can we learn?'

This session examined the impact of the pandemic on musical learning across the UK and featured contributors from all four nations of the UK who discussed recent successes for music education in the devolved nations, such as free instrumental tuition in Scotland, and a new arts curriculum in Wales, as well as the challenges remaining in the sector and future priorities for development.

All sessions can be accessed via this link: https://www.ism.org/professional-development/seminars/music-education-conference