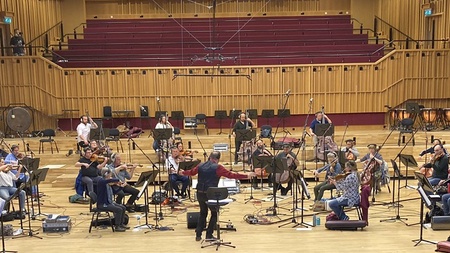 University of Aberdeen's Professor Paul Mealor- one of the world's most performed living composers - has written the soundtrack to the new BBC TV nature series, Wonders of the Celtic Deep which airs on BBC 1 next month. The series, narrated by BAFTA award-winning actress Dame Sian Philips will take viewers on a journey of discovery around the spectacular coast of Wales with Mealor's music - conducted by the composer - performed by the BBC National Orchestra and Chorus of Wales.

Filmed in Ultra High Definition (UHD) and made by some of the film-makers behind natural history series Blue Planet and Human Planet, it visits an area of the world which has never previously been explored in such detail. The series has captured an incredible array of species including blue sharks and Fin whales - the second biggest animal on the planet after Blue Whales - along with seabirds that can 'fly' underwater, and fish that can breathe on land. The final episode in the series also highlights the work of scientists and volunteers around Wales and investigates the bigger environmental issues raised by the series.

Dame Siân Phillips says: "I feel so privileged to be a part of this life-changing series. As for the beauty and the wonder of it - it shows us things never before filmed and these film makers have an eye for the wit and humour as well as the tragedy of life in the Deep".

Cameras captured some remarkable and exciting new behaviours that have never been filmed in UK waters: such as the courtship rituals of bottle nosed dolphins in Cardigan Bay as they seek a mate using a unique dialect, whistling on a higher frequency than dolphins elsewhere, as well as astonishing footage of basking sharks congregating. The dive team also filmed on the wreck of the SS Gwynfaen cargo ship, 1.5km off-shore in Caernarfon Bay and home to a diverse array of creatures including, sex shifting cuckoo wrasse, Dead Man’s Fingers coral, huge sea urchins, an ancient lobster and a giant conger eel.

Professor Mealor added: “ it’s been a true joy writing the music to this epic natural history series which explores footage never been seen before. Music, if done right, can add so much to film and tv. I hope I’ve been able to capture in music the myriad of sea worlds - from the largest whales to the smallest fish - in this extraordinary programme.”