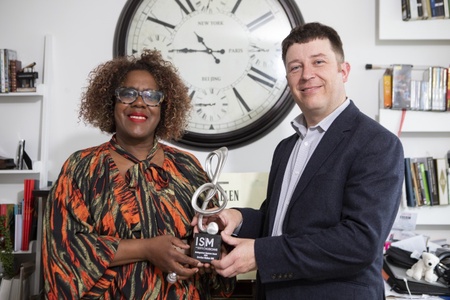 In June 2021, Belize-born British composer, pianist and singer-songwriter, Errollyn Wallen CBE was awarded with the 2020 ISM Distinguished Musician Award, one of the highest honours within the music industry, for services to music. The award was presented by Professor Chris Collins, ISM President 2020-21 at Errollyn's home in North Scotland.

The ISM Distinguished Musician Award is selected by the ISM Council and is always dated the year before it is awarded to correspond with the term of the ISM President.

Errollyn’s music is performed regularly in concert halls around the world, and she was the first Black woman to have a work performed at the Proms (1998). Her solo album Errollyn reached even greater heights, as it completed 186 orbits around the Earth on NASA’s STS 115 mission. Her work Jerusalem – our clouded hills, a reimagination of Hubert Parry’s setting, was commissioned for the Last Night of the Proms in 2020, and is dedicated to the Windrush generation. Her EP, Peace on Earth, recorded by The Choir of King’s College, Cambridge, was released last November.

Holding teaching positions at several conservatoires, including Royal Conservatoire of Scotland, Royal College of Music, Trinity Laban Conservatoire of Music and Dance, and Royal Birmingham Conservatoire, Errollyn is passionate about inspiring the next generation of composers. She is also frequently seen and heard presenting on BBC television and radio.