Lockdown Compositions to be Released
01 October 2020 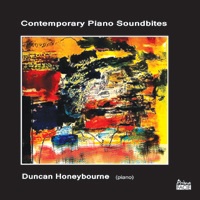 A CD of music written by some of the country's leading composers during lockdown will be released this month on the Prima Facie record label. The CD, Contemporary Piano Soundbites, is a collection of pieces written for pianist Duncan Honeybourne which he initially premiered on YouTube from his living room during the lockdown, when public performances were entirely not permitted.

The CD features a new work by Head of Music at the university Dr Phillip A Cooke, as well a short new piece by Visiting Fellow in Composition Prof John Casken. There are also pieces by the likes of Francis Pott and John McLeod (both of whom have given seminars at the department in recent years), Sadie Harrison, Adam Gorb and many others. Duncan recorded the CD shortly after lockdown ended and is hoping to give live performances of the pieces around the country in the coming months – it is hoped that he may come to the university in 2021 to give a Scottish premiere of the compositions.