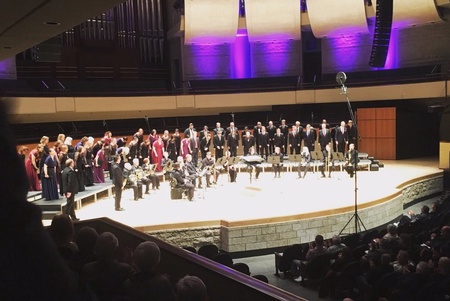 For this year's Good Friday Concert, the young German conductor Tobias Patrick Wolf, who studies at the University of Aberdeen Music Department, has been invited to conduct the ensemble in a part of the programme. He has been awarded with the Carlaw-Ogston Conducting Bursary which enabled him to participate in this outstanding opportunity.

The traditional Pro Coro Good Friday concert at the Winspear is an annual event of choral music not to be missed. Joined by the Da Camera Singers and fifteen wind players, Pro Coro Canada have performed the magnificent Mass in E-minor by Anton Bruckner as the finale of a varied programme. This feature-length work from 1882 has been called a “romantic symphony with liturgical text” and is without parallel in the church music of the 19th century.

This year’s recipient of the Carlaw-Ogston Conducting Bursary, Tobias Wolf, has studied in Cologne and Bonn in Germany before coming to study at the University of Aberdeen to further his development as a professional musician, focusing on conducting and composition. His career in the music industry started with a position at the Beethovenfest Bonn under director Ilona Schmiel and a liaison with international participants including the world’s most renowned orchestras, soloists, and conductors. He currently conducts ensembles at the University and has been awarded with a number of prizes and scholarships.

Under the mentorship of Music Director Michael Zaugg, the emerging conductors can enhance their gestural work, score study and rehearsal technique, working with the prestigious choir. Edmonton’s own Pro Coro Canada was founded in 1981 and is one of only a few professional choirs in Canada. Under the direction of Michael Zaugg, the choir is widely recognised as one of this country’s finest. Recent highlights include two live recording releases, a composer-in-residence program with Grammy nominated composer Ugis Praulins, and critically acclaimed tours of four provinces.

The Good Friday concert was a huge success, the performer were applauded by the audience with standing ovations. For Tobias Wolf, who not only conducted in the first half, but also joined as a singer for the second, this was the largest performance venue yet: The Francis Winspear Centre for Music hosted an audience of over 1,000 people. It is widely known for its excellent acoustics and usually home of the Edmonton Symphony Orchestra who present over 85 concerts every year. This was very much a night to remember, and another great exposure for the University of Aberdeen Music Department who again who for the second year in a row made the top 15 according to The Complete University Guide 2020 rankings.