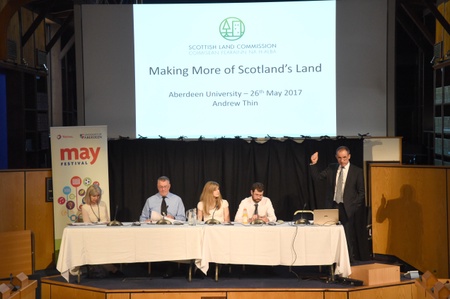 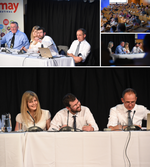 Andrew Thin, Chair of the Scottish Land Commission (Coimisean Fearainn Na H-Alba), provided the keynote presentation. He introduced that new body, which became fully operational on 1 April 2017, and said a few words about the forthcoming Land Rights and Responsibilities Statement, before considering what it and the Land Reform (Scotland) Act 2016 could mean for the management, use and regulation of land in Scotland.

The Scottish Land Commission was established under Part 2 of the new legislation. It is a Non-Parliamentary Departmental Body (or “Quango”), not completely independent of the Scottish Government but somewhat distanced. There are five land commissioners and one tenant farming commissioner with a range of experience and expertise of business, planning, science and public service.

Andrew Thin’s presentation was entitled “Making More of Scotland’s Land”. The principle of “more for more”, it was explained, will underpin the work of the Commission. Not “more” merely in the traditional sense of productivity, but in bringing greater benefits from the land to more of Scotland’s people. The forthcoming Land Rights and Responsibilities Statement, which is provided for in Part 1 of the 2016 Act, is intended to balance rights and responsibilities relating to land using a human rights based approach. The Scottish Government recently consulted on the contents of the Statement, and the Commission’s response (PDF) to that noted anxiety about ambiguity of language and lack of clarity of outcomes. Thin then outlined that the Commission’s role is to encourage flourishing communities, minimise dispute and pursue more diverse and disaggregated land ownership. Its strategic plan for 2018-2021 and some Codes of Practice relating to tenant farming (with agricultural tenancies being an ongoing issue for rural Scotland) will not be released until after the General Election on 8 June 2017.

Following Thin’s address members of an expert panel (reflecting sectoral, geographical and planning expertise) each contributed their perspective on the Statement and land reform policy.

Anne-Michelle Slater spoke first, addressing the role which planning law could play in land reform. Andrew McCornick raised his concern as to the perceived unclear trajectory of land reform. He explained that many farmers (both tenants and owners) felt overburdened by bureaucracy and were suspicious of what could be a threat to current land-based activities. Annie McKee focussed on community engagement and transparency in her contribution.

The audience were given an opportunity to ask questions and hear the response of the panel. Wide ranging discussion followed. There were questions about environmental matters, including biodiversity and water quality. Linked to this was land use, in particular forestry and deer management, and there was discussion about tenant farming (and the recent review of it) and the problem of rural community depopulation. One audience member, Professor Roderick Paisley of the School of Law, used the example of a farmer whose ownership allowed him to stay on land earmarked for the Trump International Golf Links to highlight the protective role that property rights can play. The questions were somewhat rural in focus, but it should be borne in mind that land reform policy also affects urban Scotland, that being a point Thin made in his presentation. Thin also stressed the Commission’s intent to engage with communities across Scotland (indeed, only the night before, such an event was held at Thainstone Mart in Inverurie).

The development of land reform in Scotland has been gradual. It will be fascinating to see the effect of the Scottish Land Commission and the Land Rights and Responsibilities Statement on the relationship between Scotland’s people and Scotland’s land. Perhaps this event, and indeed this blog post, might play a small role in highlighting that development.

To follow the event as it happened, relevant tweets from the @RuralLaw account can be found here.

Malcolm Rudd has recently worked as a research assistant at the School of Law, looking at aspects of land law with Malcolm Combe, with the support of the Carnegie Trust for the Universities of Scotland. He presented a paper on land reform and succession (inheritance) at a conference on 26 August 2016, also at the University of Aberdeen.

This blog post is by Malcolm Rudd, a recent Diploma in Professional Legal Practice graduate of the University of Aberdeen.