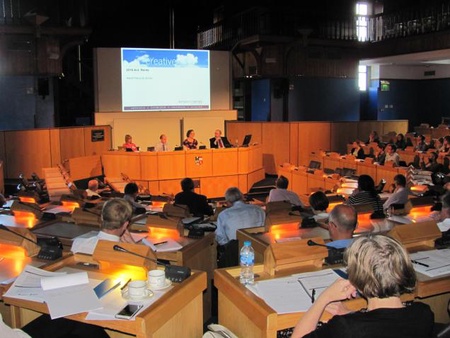 A version first appeared in Issue 177 of the Scottish Planning & Environmental Law journal (October 2016) at page 104.

On 26 August 2016, the University of Aberdeen hosted a conference about one of the hottest potatoes in Scottish politics at the moment: land law reform. The conference, and a related lecture on land reform and the environment the previous evening, brought together stakeholders with a variety of perspectives, experiences and interests, including the Scottish Government and representative groups Scottish Land & Estates, NFU Scotland and Community Land Scotland.

As has been explored on this blog previously, there has been an extensive commitment by the Scottish Government to land reform. The conference allowed speakers and delegates the opportunity to reflect on and critique the developments made under recent legislative reform (most notably in the Land Reform (Scotland) Act 2016, but also via other legislation like the Community Empowerment (Scotland) Act 2015). In addition, delegates heard of continuing implementation of the most recent measures and perspectives on the route the continuing land reform process should take. A comparative panel also brought together analysis of Australian, English, North American and Norwegian perspectives on land reform to provide alternative viewpoints on how different jurisdictions deal with the control, distribution and development of land.

A key objective for the day was to catalyse further collaboration, discussion and research to refine the ongoing development of land reform in Scotland. Historical perspectives, most notably delivered by Professor Ewan Cameron of the University of Edinburgh and the advocate Robert Sutherland, considered why it was that the so-called Scottish land question still resonates today, and allowed delegates the opportunity to reflect on why how far legislative reform has taken Scotland since the Leases Act 1449, a statute that seems a strong contender for the crown of the first land reform statute in Scots law. A blogged version of Sutherland’s presentation is available here.

Fast forwarding to the present day, Fiona Taylor of the Scottish Government set out the government’s position on the implementation of Parts 1-5 of the Land Reform (Scotland) Act 2016 over, approximately, the next six to twelve months. Moving through the 2016 Act sequentially, Part 1, when enacted, will introduce the Land Rights and Responsibilities Statement (“LRRS”). According to section 1(2) of the 2016 Act, the LRRS will be a statement of principles for land rights and responsibilities in Scotland, which there will be a consultation process for before being laid before Parliament. This important and symbolic statement is viewed by the Scottish Government as something of a “scene-setter” for the future of land reform. The further Parts of the Act build on the principle of future land reform that is at the centre of the LRRS’s purpose. Under Part 2, the Scottish Land Commission is established, as a non-departmental body, with the intention of being operational by April 2017. There was some debate about where this Commission might be based, with one suggestion being that it should be located in what might be classed as a more peripheral location in Scotland, but Taylor noted in discussions after her presentation that it would be accommodated within existing Scottish Government estate for cost mitigation purposes and it has now been confirmed that it will be based in Inverness.

One recent headline-grabbing issue in Scotland, and the UK as a whole, relates to transparency of landownership and other assets. Part 3 of the 2016 Act takes some steps in this regard, providing the Scottish Government with the power to require and record information of persons with controlling interests in entities that own or rent land in a Register. An analogy can be drawn with the relatively recent introduction of the new “Persons with Significant Control” Register in the context of company law. (Another analogy might be drawn with letting agent regulation.) These developments are reflective of increased public concern – especially following the “Panama Papers” scandal – as to who holds power in important social and economic assets. Certain points of detail are still outstanding as regards Part 3, which were noted by Taylor as including:

A consultation was launched on 11 September 2016 in relation to the content of the Part 3 Regulations. It closes on 5 December 2016.

Part 4 of the 2016 Act obliges the Scottish Ministers to issue guidelines on engaging communities in the context of decisions taken in relation to land. It is in the early stages of implementation. The ultimate objective of this Part was noted as improving the collaboration of multiple, cross-spectrum stakeholders in maximising the effective use of land in Scotland. Further external workshops for external stakeholders will be arranged for the coming months as part of wider engagement in the drafting of the guidance. The final topic considered by Taylor was Part 5 of the Act, the community right to buy land to further sustainable development. This is unlikely to be brought into force until late 2017 at the earliest. This is due to the government recognising the introduction of other community rights to buy, such as the right to buy abandoned, neglected or environmentally mismanaged land, by the Community Empowerment (Scotland) Act 2015, will take time to settle in with the communities for whom their use is intended.

Another measure in the 2016 Act is the re-introduction of sporting rates under Part 6, which ends a tax exemption enjoyed by this land use since the mid-1990s. Katy Dickson, of Scottish Land & Estates (SLE), took the opportunity to critique the reintroduction on policy grounds, opining that the policy drivers for reform – tax-raising and fairness – had not been made out. Dickson also noted the practical difficulties in implementing the legislative provisions, particularly in the context of valuation. With the large land area of Scotland afforded to sporting activities, taken together with the provisions of the 2016 Act relating to deer management (in Part 8), the new legislation could have a real impact on Scotland’s environment.

As regards the continuation of the land reform debate, a panel with representatives from Community Land Scotland (CLS), SLE and NFU Scotland (formerly known by the longer moniker The National Farmers’ Union of Scotland)) offered views as to how the ongoing debate should progress. For CLS, it was noted there have been two significant, positive changes to the narrative of the debate during recent years that have changed the debate’s nature. Firstly, following on from the Final Report of the Land Reform Review Group report, the recognition that land is a finite and crucial resource to be used in the public interest for the common good, and a gradual shift from the prior view that land was a private matter where the public interest was of relative unimportance. The other change has been the progressive acknowledgment of wider human rights considerations (such as those found in the International Covenant on Economic, Social and Cultural Rights) beyond the landowner’s right to peaceful enjoyment of property under Article 1, Protocol 1 of the European Convention on Human Rights, in light of the broad social, economic and indeed environmental importance of efficient and fair land use. In this connection, looking ahead, CLS has unanswered questions on how to actively discourage concentration of landownership into the hands of few, with direct methods such as Compulsory Sale Orders or indirect measures such as tax reform being possible ways of addressing these.

Comparatively, the perspectives shared by SLE offered the view that there is nothing inherently wrong with large landowners if they are responsible. A concern was raised about the potential for the LRRS to be framed so as to focus mostly on the Landowners whilst neglecting the responsibilities of other stakeholders (e.g. access takers). While some might note such a framing of responsibilities would properly reflect the rights a landowner enjoys (and it can also be noted that access takers are already beholden to rules about responsible access, fortified by the Scottish Outdoor Access Code), SLE’s concern about a potential responsibilities imbalance was echoed by NFUS, who highlighted the existing, extensive legislative frameworks that already constrain landowners. Second was the divisive nature of the debate (the term “land reform” itself was noted as being something that immediately divides parties by reference to their respective interests) and method of achieving existing objectives. Looking at one flagship, existing objective, a flaw identified with the one million acres in community ownership objective is that the attainment of this might require some kind of compulsion, which could jeopardise collaboration between different stakeholders (such as the protocol for voluntary transfer agreed by SLE and CLS) and continues the polarising landowner/community narrative. In this regard, NFU Scotland expressed concern that the redistributive aspects of land reform could pose a threat to activities that already contribute to the rural economy. Separately, NFU Scotland welcomed the creation of the Scottish Land Commission, and particularly satisfaction with the creation of the Tenant Farming Commissioner office, viewing this role as one that can improve relations and collaboration between landowners and tenants.

Further panels at the conference focused on the landlord and tenant relationship and the law of succession. Whilst these may not be directly related to planning and environment law (the focus of the original article in SPEL), the tangential impact of reform in these areas (particularly in terms of how they impact on the crofting or agricultural holdings sector) could, in fact, have a real impact on the way land is distributed and/or used in Scotland.

Of interest to planners was a presentation by Bob Reid, which looked at the multifarious factors that have contributed to the housing issues the UK is facing at the moment. These are too multifarious to consider in any detail in this short note, but the rise in reliance on private sector development was highlighted as a crucial factor.

For those interested in the environment, the lecture on 25 August by Calum Macleod, Jayne Glass and Malcolm Combe sought to consider how much of a driver environmental considerations were for land reform, and the impact the various community and tenant rights of acquisition could have on sustainable land use in Scotland, in part building on a recent Environmental Law Review article by one of the authors of this post (open access version here). To oversimplify that, if current landowners are not looking after the environment, someone having a right to acquire from them might play a role in either: encouraging a landowner to look after the environment to try to stave off a land reform event; ultimately improving the environment after a forced sale, as the environment is something that features in the equation for any reallocation of ownership to someone else. Wider policy issues were also considered by Rob McMorran, of Scotland’s Rural College, to provide the context for some important Scottish Government commissioned research into matters like the scale of landownership and the drivers for land use decisions made by private, NGO and community landowners.

These proceedings at Aberdeen provided an opportunity to bring together individuals and organisations that will play a role in the next stage of Scotland’s land reform journey. Whilst land reform will invariably involve a degree of unsettlement of existing positions, it is hoped that the collaborative spirit of this event and this short write-up of it can be channelled into any future developments, with the objective of achieving better solutions for as many stakeholders as possible in relation to the implementation of existing reform and contributing to reform that is yet to occur.

A collection of tweets from the event is available on https://storify.com/MalcolmCombe/abdnland-land-reform-events-at-the-university-of-a. Some personal reflections of Malcolm Combe on the event are available here. The authors would like to thank all involved with SPEL and The Knowledge Exchange for agreeing to the publication on this blog of this amended version of the article first hosted by them.