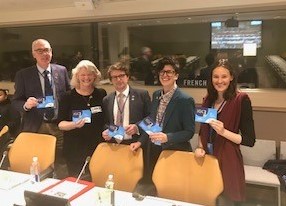 The potential of the oceans’ raw materials, which scientific expertise can transform into invaluable products to benefit society, offers rich opportunities. As 64% of the surface of the oceans is beyond the control of states, questions result as to who benefits from product development and where responsibilities lie regarding Marine Genetic Resources (MGR). This issue was explored in March/April 2019 in New York at the second Intergovernmental Conference (IGC2) on Marine Biodiversity of Areas Beyond National Jurisdiction.

IGC2 built on resolutions of the United Nations General Assembly from 2015 and 2017 to develop an internationally binding legal instrument under the United Nations Convention on the Law of the Sea. The goal is to address, together, the conservation and sustainable use of marine biodiversity in areas beyond national jurisdictions including sharing of benefit, area-based management tools including marine protected areas, environmental impact assessments and capacity building and the transfer of marine technology. The University of Aberdeen held a side event at IGC2 together with the International Union on the Conservation of Nature and the Deep Ocean Stewardship Initiative.

Termed “Mare Geneticum and an EcoSystem Approach: Power, Openness and Sharing”, this event built a workshop held in Aberdeen before the first IGC conference. This discussed the place of sharing, openness, scientific goals and realities and the uncertainty regarding  intellectual property (IP) (see here).

Our work continued a long standing research collaboration by and between scholars from Law and from Chemistry. Professor Abbe Brown’s work explores the intersection between IP and other areas of law to address societal challenges in an integrated manner; Professor Marcel Jaspars has developed a pragmatic and workable means (termed Mare Geneticum) of delivering both scientific best practice and ultimate commercialisation using prior notification, building on a concept developed in EU FP7 PharmaSea); Ms Anne-Michelle Slater’s research explores an participative ecosystem approach to governance from marine and terrestrial planning; and Dr Olivia Woolley’s work pursues legal frameworks and ecological governance for ecosystem functionality.

The side event aimed to challenge, inform and stimulate discussion regarding the place of science, an ecosystem approach and IP as the negotiations moved forward. Like all of IGC2, the meeting took place in the context of the President’s aid to negotiations (deliberately not termed a draft or even a zero draft). Notably, this document makes reference, building on their having been raised in the discussions so far, to IP,[1] an ecosystem approach[2] and to the open notification proposal.[3] This last point reflects the long running work on this proposal within the policymaking and scientific landscape – indeed Marcel Jaspers made the IUCN intervention in the chamber on the scientific need for access and benefit sharing.

The side event, ably chaired by Lydia Slobodian of IUCN, had short introductory presentations.  Marcel Jaspers explored the different stages in the biodiscovery pipeline, and its obstacles, from marine genetic resources to pharmaceutical drugs and then developed further the Mare Geneticum proposals for a notification and data management process from origin to exploitation. Muriel Rabone of the Natural History Museum discussed the high level of notification and information sharing which is already ongoing consistent with scientific best practice, with particular reference to cruise sampling methodologies, taxonomy and the importance of data being findable, accessible, interoperable and reusable. Dr Thomas Vanagt of ABS Int evaluated the key factors which are relevant to balanced benefit sharing , stressing the importance of involving developing states, facilitating access on a  predictable and stable basis with mandatory sharing of data and material. Finally, Abbe Brown analysed and combined the relevance of IP and information control rights to access and benefit sharing including regarding data standards and the prospect of IP rights arising early in the development pipeline, and to technology transfer; the risks of ignoring these for MGR drawing on developments in other sectors; and the place of an ecosystem approach (focused more on nature and less on the human and on property) in delivering all the IGC goals.

The main aim, however, was discussion and we were delighted at the high level and quality of questions and debate which then followed. Key issues included the extent to which IP rights are being obtained such that genetic sequences themselves can be the subject of private control, the connection (if any) between IP rights and the generation of benefit, existing possibilities and growing cultural openness to sharing of findings and also of mistakes.

Some futures and next steps

Looking forward, the next set of negotiations will take place in New York in August. A draft document for discussion is to be released in July.

All three themes explored – bring about a workable solution for science, an ecosystem approach and more reflection on the appropriate place of IP  - remain very much live after IGC2.  Regarding IP in particular, strong positions were taken (notably by the United States and by the European Union) that IP should not form part of these negotiations and rather be dealt with at the more general discussions at the World Trade Organization and at the World Intellectual Property Organization. There are also arguments, however, (particularly by the Pacific Small Island Developing States) that regard should be had to IP, with concern expressed regarding genetic sequences and traditional knowledge. There has been an increasing reference to IP in interventions from states, IGOs and NGOs and a side event was also held exploring IP issues with particular reference to ongoing activities at WIPO. Further, a theme from informal discussions was that participants are interested in learning more about the place of IP and the opportunities, and barriers it can and does pose in some situations, and how best these can be managed in this forum.

Our Law/Chemistry team looks forward to contributing further to these negotiations through a side event and working with IUCN and other colleagues to influence and inform direction, and to draw on our scholarship to contribute to addressing some of the key societal and scientific issues of our time.

More details of the negotiations can be found on the High Seas Alliance Treaty Tracker, daily “Earth News Negotiations” bulletins from IISD and from UN Paper Smart.

More details of our involvement (past, present and future) can be found at our University of Aberdeen site which includes details of slides, podcasts and accompanying documents in respect of the side event. For details of the work of our partners on these issues, see also IUCN and DOSI.