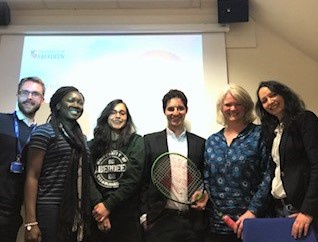 In celebration of World IP Day 2019 the Aberdeen Centre for Commercial Law arranged for a short series of informal presentations to discuss the interconnection of Intellectual Property with this year’s theme: sport.

Professor Abbe Brown blew the starting whistle, by serving up a discussion of the intellectual property issues connected to her tennis racket. Starting out with the traditional incentivization debates (would investors have failed to fund research into increasingly lightweight and efficient materials without a patent, or would the ability to sell better products sooner have been sufficient?) she explored how many of IP law’s key debates played out in this particular arena. She raised the question of who should be considered to control a sport, when technologies like Hawk-Eye were perhaps subtly shifting the seat of power on these matters.  Here as well, interesting trade mark questions were raised by the fact this company chose to protect its brand with an unregistered trade mark – perhaps because the name would  (at least in the past) have initially been refused as too descriptive.

Dr Titilayo Adebola, who had proposed the event, widened the discussion to intellectual property’s connection with sport more broadly. Highlighting the breadth of overlap she took stock of the wide array of areas affected: from the broadcasting rights in sports events which in themselves (say, the football match) may have received no copyright protection; to the impact of patents in promoting development of sporting clothes, equipment and technology; to the role of trade marks in creating a common psychological touchstone in the zeitgeist (for example, NIKE shoes for running). She celebrated the power of sport to mobilize spontaneous excitement, mobility and solidarity; to help the consolation of peace and harmony.

At this point the floor opened up to a more freeform discussion as to what it was which defined a “sport” when increasingly non-athletic pursuits (such as billiards or chess) are increasingly recognised as “sports”. This set the stage for Mr James Russell to present a discussion of intellectual property and eSports. Starting from the International Olympic Committee (IOC) announcement that competitive videogaming could be considered a sporting activity, he invited colleagues to consider the ways in which intellectual property protection for eSports differed from conventional sport and to what extent this could be justified. This led to discussion comparing eSports to other pursuits which might straddle this boundary like WWE, figure skating, and rhythmic gymnastics; and the question of whether or not sporting performances should attract copyright protection as performances in the same way as might be the case for dance. He repeated the analogy that video-games might be considered finite state machines and challenged colleagues to consider whether the “originality” threshold for copyright works as defined by the CJEU as requiring “free and creative choices”[1] could encompass quasi-sporting performances (including those of eSports athletes, and videogames “streamers” on platforms like YouTube Gaming or Twitch.tv).

The conversation then shifted to ask whether “fair competition” was at the core of debates around the definition of sport for IP; and how this related to broader debates about the underlying justifications for the intellectual property law regime.  It was suggested that although World IP Day seemed to be enjoying some success in presenting a balanced defence of IP’s benefits in recent years, continuing concerns about IP’s flaws were still far from completely laid to rest. The attendees speculated as to what the sporting world might look like were intellectual property rights to be abandoned and considered the growing dataset on alternative forms of monetization - like crowdfunded patronage. It was suggested that although in many areas the world might not look so dramatically different, IP rights might need to be considered differently in particular commercial and societal contexts, and sport/entertainment might be one of these special cases.

Overall, the event was a very stimulating and enjoyable opportunity for members of the Aberdeen Centre for Commercial Law to explore the myriad ways in which intellectual property issues permeate through so many aspects of our daily lives; and some useful props helped remind the Centre that there were still plenty tricky problems yet to be cracked, and still much to be said for “going for gold”.

James works in the Postgraduate Office at Aberdeen University’s School of Law and has a BA and MA in Law from Cambridge University. He completed an LLM in Intellectual Property from Uppsala University with a thesis focussed on copyright and interactive media and has been accepted for a traineeship with Fieldfisher LLP starting in 2020.