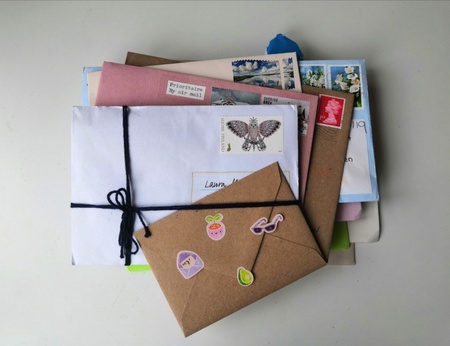 Let’s talk about how amazing and underrated snail-mail is!

Did you know that before the 1840s, recipients of the letters had to pay expensive charges upon delivery and therefore mail was more of a thing for the upper classes? But when the “Penny Post” was introduced in 1840, sending letters became extremely popular and there’d be as many as twelve mail deliveries a day in Victorian central London. I found this information from a book called Posting It: The Victorian Revolution in Letter Writing by Catherine Golden, and it had such a cool picture of a Victorian valentine in it that I have to share it with you:

Look at that! Now, we might not have the energy to be as extra as the Victorians were, but this pandemic could be the perfect opportunity to take up sending letters again. This is a time when small gestures mean everything and taking the time to write and mail a letter to someone shows them that you think about them and want to brighten their day, even if you haven’t seen them in ages. Older relatives will especially appreciate receiving postcards, but I’m pretty sure that anyone would love receiving one.

We might assume that texting and facetiming has removed the need for snail-mail, but why can’t those things coexist? In fact, the existence of modern technology makes letters feel more special. Don’t worry about not having anything smart or profound to say because you’ve already been texting with someone. Think of letters as deliberate gestures that you do despite not really needing to. Roland Barthes said this about love letters in the 70s, but I feel like it’s relevant here: “I have nothing to tell you, save that it is to you that I tell this nothing.”

However, if you can’t think of anything to write about, here are some ideas:

Remember that your letter doesn’t need to be long! You can also add some small things inside the envelope to spice it up, like stickers. Dried flowers are extremely cute too: pick a couple of flowers, put them between sheets of paper and add weight (a few books will do) and leave them be for a few days. But remember to check if the flowers you’re planning on picking are protected.

If you don’t have any letter paper or envelopes and don’t want to buy any, you can make your own. Take some A4 sheets of paper, put something under them (like a flattened cereal box) to prevent a mess, and brew coffee or strong tea. You only need a tiny bit, 1/5 of your coffee cup at most. Then take a brush and “paint” the paper all over. Wait for about an hour, flip it, and do the other side. Let it dry for a couple of hours. Coffee tends to give a darker colour, but it smells strongly of coffee afterwards, whereas tea doesn’t leave a smell but leaves a more uneven, stripe-y result. It still looks pretty cool! Both options give the paper an aged look. Here’s a picture of mine; the smaller one is made with coffee and the other with tea.

As for the envelopes, it’s a good idea to reuse that brown paper filling that comes in boxes if you order something, as it’s slightly sturdied than printing paper. I’ve also used a brown paper bag. You can of course use any paper as long as it doesn’t look too thin and fragile. There are some tutorials on YouTube on how to fold envelopes, like this one.

Or you can go rogue and wrap the paper around your letter and tape it together – there are no specific rules you need to obey. If you have any, you can also use markers, paint, or washi tape to decorate your envelope. Or just buy some readymade letter papers and envelopes if you want to! There are loads of cute ones on Etsy.

Stamps for sending max. 100g letters within the UK are 66p, and international ones are £1.70. You can get them at Co-Ops or St Nicholas Kirk’s WHSmith, for example.

If your friends don’t get as interested in sending letters back to you but you’d really like to receive some, I’ve got good news for you: pen-pals are still a thing! There are sites online where you can find someone who will correspond with you. In time you’ll have a stack of letters that you can look at fondly, and it’s so much nicer browsing those than reading old texts back.