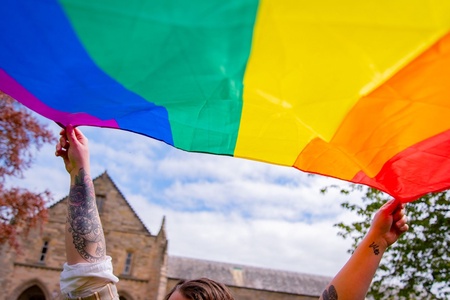 As pride month approaches, I find myself thinking a lot about what it means to be proud again. Does it mean being able to declare your labels proudly and openly to whomever you choose? And how are you meant to be out, loud and proud, if you are not even out yet?

A few weeks ago, I told a friend of mine about an experience I had which made it pretty clear that I was, in fact, not straight. Instead of laughing with me about the people involved, because believe it or not it was actually a funny story, she proceeded to ask me with which labels I identified exactly now. As you can probably tell from my wording, that made me a little uncomfortable. Now, I am not writing about this to call anybody out or make it a sermon. I am writing about this because it perfectly illustrates the difference between coming out and Inviting In.

Let’s first explore the more well-known concept of coming out. In the past, coming out was a kind of necessity, a defensive mechanism. People came out to be able to live as themselves, to find community, to register protest, and to show people that, yes, they do exist, and they will no longer be quiet about it. They wanted to escape obscurity and oppression by becoming more visible.

As many films and books would have it, coming out nowadays is still the most notorious part of any queer person’s life. It’s presented as some kind of turning point and not being out, “being in the closet”, is somehow always connected with shame, and a restriction of your true self. And yet, another friend of mine, more than a few weeks ago, asked me, “do you even have to come out in this day and age anymore?”.

Cishet, that is people who are both cisgender -identifying with the gender they were assigned at birth- and heterosexual, sure don’t, so why should we? It’s not our responsibility to explain ourselves to anyone and the culture of expecting, if not demanding people to come out puts pressure on queer folk to become visible in order to feel truly accepted. However, the mere idea of coming out can be extremely stressful, not only because of others, but also because of the rigorous self-interrogation that often precedes it. For many LGBTQ+ people questioning yourself and your labels is an inherent part of your experience. Heteronormativity, that is the system of societal, cultural and individual expectations for everyone to be straight (and cisgender), makes you question yourself all the time. Can I really be queer if all I see every day says I shouldn’t be? When constantly questioning your identity, openly stating your labels can be a powerful thing, as you are actively carving out a space in the world for who you are, and you may find safety and power in that.

However, often this kind of power, that should be rooted in the person coming out, is perverted into something else. Coming out stories sometimes actually have decidedly homophobic undertones. Cishet people want to see stories of brave gay, white boys who come out to their whole school all at once, Love, Simon style, or an asexual person who comes out only to get “fixed” somehow by seeing a doctor, or a lesbian who comes out and dies the next season, so they don’t have to deal with the actual experiences of LGBTQ+ people. While queer people usually don’t require you to come out in order to accept you, and know that coming out is only a part of their experience, that sometimes you have to come out again and again, and that you are also no less queer for not having come out, never planning to, or for being yourself and not discussing it with anyone.

That is why I really like the concept of Inviting In. Unfortunately, I couldn’t find the origin of this concept, or who coined it, although admittedly to many queer folks it’s not a new idea. Inviting In means exactly what it says on the tin: You invite people into your world and share your experience and your feelings only with those that you want to share it with. Instead of focusing its gaze on other people, it shifts the perspective and thus the authority and power in the situation onto the queer person. It also acknowledges that coming out can be intensely intimate and that therefore, nobody has an inherent right to know about anyone’s gender identity, sexuality, or lack thereof.

Obviously, as many of you may have noticed, there’s a lot of privilege in this kind of concept. For a lot of people, the choice between coming out or not is not a question of perspective, but a means of survival, especially in homophobic and transphobic environments. Furthermore, for some people there really is no difference between living authentically as themselves and coming out because people will notice them when they “come out”. And in those cases, being in the closet actually is limiting, because it is exhausting to pretend to be someone else.This is not always the case though. Coming back to the story I told at the beginning, what was happening was that I, who is not always noticeably queer, but never actively hiding my queerness, was sharing an experience I made as a queer person -I was inviting my friend in- and she demanded more from me. She demanded to hear me come out to her explicitly. And in that scenario, a shift in perspective would have been really helpful. A shift that recognises that she did not have any right to my experiences and labels, no right to demand my coming out, but that I decided to invite her in anyway.

In conclusion then, Inviting In is a concept that is asking you to change your perspective on and the narrative surrounding coming out. It highlights that it is not the cishet person who is entitled to know anything about someone, but the queer person who is sharing something with them. This doesn’t mean we have to be quiet about who we are, but it does mean that, ideally, we get to decide the terms on which we want to be who we are. It means we get to define ourselves, claim our experiences as ours and find pride in that.

If nothing else, the concept of Inviting In illustrates that queer voices everywhere matter, not just if they are visible and observed by cishets. And that’s what pride month is all about.

For more information on the LGBTQ+ community at Aberdeen and the support available to you as a member of the community, please click here. AUSA has forums such as the LGBTQ+ forum, Trans Students’ Forum, and the Women & Non-Binary Students’ forum. For other advice and support outside the Uni, visit https://switchboard.lgbt or https://www.stonewall.org.uk/.