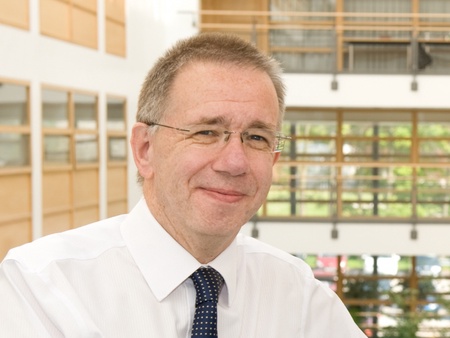 There is a road in Applecross in the north-west Highlands called Bealach na Bà which twists,winds and climbs to more than 2,000ft above sea level, making it the greatest ascent of any road climb in the UK. With a gradient approaching 20% in some places, its narrow sharp bends have seen it dubbed the UK’s toughest climb. The reward for taking it on? Some of the most breath-taking scenery on these shores. But boy, does that road make you pay for the privilege!

Along with a team of colleagues from the University of Aberdeen and NHS Grampian I had the dubious pleasure of pitting my cycling skills against this notorious route back in May as we tackled the North Coast 500 as part of our bid to raise £4.5million to install a world class cancer research team in the north-east.

Sadly we weren’t able to enjoy the full splendour of the peninsula’s views for long as by the time we reached the summit, the cloud descended and the wind picked up, making conditions pretty unpleasant.

Despite the pain of the effort, our 20 riders, aided by our fantastic support team, managed to complete the task without injury – the only exception being the slight bump I received myself at the summit when a massive gust of wind blew me off my feet while taking a selfie at the cairn with a friend!

Overall, our journey took our intrepid team, some of whom were expert cyclists, others, just like me, were enthusiastic hobbyists driven by the cause, eight days to complete. It was a fantastic experience and the comradery of the group was evident throughout – providing a lift on days when the going was tough. When I wasn’t digging deep at the beginning of yet another testing hill, the long days on the road gave me the opportunity to reflect on just how geographically vast and diverse the north and north-east of Scotland is - from the rugged beauty of Shieldaig to the picture perfect Oldshoremore Beach in Kinlochbervie.

As one of the people responsible for training the doctors who may well go on to serve the regions we were cycling through, diversity is a topic that’s often on my mind. There are some schools in these regions that have never sent a pupil to medical school and that is something we are working tirelessly to change. Why? The shortage of GPs in this country is well documented. The way things are going, villagers in some of these beauty spots may soon have to travel far from their homes to see a doctor. But we know that if we can attract school pupils from these areas to study medicine there is a higher chance they will come back and work here as doctors. It’s our best chance of addressing the problem.

A large part of the challenge is simply getting through to all kids - from Alness to Wick, Fraserburgh to Portlethen, to tell them, ‘yes, you can study medicine. You can be a doctor’. If we can create a culture where it’s not unusual for pupils to go to medical school then it will attract others to follow suit. To that end we have worked really hard to create novel ways of attracting students from rural Aberdeenshire and the north of Scotland to study medicine in Aberdeen. One such programme, run in conjunction with NESCOL and NHS Grampian called Gateway 2 Medicine, has the last two years offered a chance for 20 students who never before would have had the opportunity or even the inclination, for whatever reason, to study medicine.

We also know that due to teaching issues, especially in the Highlands, some school pupils don’t get the opportunity to study higher chemistry. To address this, we now accept students to medicine who don’t have chemistry as a higher and instead we’re getting them up to speed once they arrive.

To specifically tackle the issue of lack of rural GPs, we have also run a programme for the last two years that sees a group of first year medical students given a two day taster of living, working and relaxing in rural parts of north and north-east Scotland. I’m happy to say that the demand for places on the course outstrips supply which shows there is a real enthusiasm for working and living in these areas.

Some say the limited spaces we have for Scottish medical students, whose numbers are capped by the Scottish Government, should go to those with the best grades, regardless of where they come from or their background. It is important to remember the job of the University of Aberdeen’s medical school, and all medical schools across the country, is to select and train doctors that will go on to meet the needs of our society. Currently, we are in desperate need of more GPs, and more specifically, GPs that will go on to work in rural areas - so it makes complete sense that this is where we focus our efforts.

We know that it’s not just getting the best academic grades in examinations that makes the best doctor. We also take into account the full background of a person in relation to the grades they have achieved. Of course good grades are a hugely important factor when it comes to accepting students onto our courses, but it is not the only factor – especially when we’re talking about people who must identify and provide the most vital care for people from a wide range of different backgrounds.  It’s also worth noting recent research from my colleague Professor Jen Cleland who found that across the UK, medical students from state schools are nearly twice as likely to graduate in the top 10% of their class as students form independent schools –despite, on average, independent school students scoring higher scores in their medical school entry tests.

All along our route on the North Coast 500 we were stopped by countless locals and tourists, intrigued by our matching yellow and blue team cycling vests. All wished us well on our way, with many even donating to the cause. I hope next time I cycle this route (and I vow to myself I will do it again one day) I am optimistic that I will be able to pass through many more towns and villages in this region who have sent students to our medical school