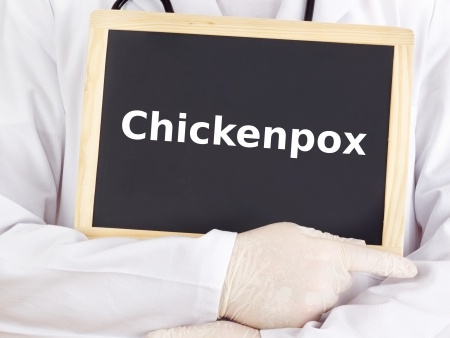 New research from a team, including the University of Aberdeen, has used Google trends data to predict when certain parts of the world will experience a chicken pox epidemic.

Vaccine preventable childhood diseases, such as chicken pox, are prevalent throughout the world, however disease incidence is often unknown due to underreporting. A new study published  in Proceedings of the National Academy of Sciences shows that Google data trends are particularly effective in countries that lack reporting of disease incidence.

The research group, including Dr Tyler Stevenson from the University of Aberdeen, discovered that people Google chicken pox frequently during chicken pox epidemics, which allowed the team, made up of academics from the Universities of Glasgow, Michigan, and Princeton University, to pinpoint when epidemics occur and anticipate future epidemics. Importantly, the researchers also found that in countries with mandated chicken pox vaccination, like the United States of America, the seasonal epidemics of chicken pox have been lost.

The study demonstrated that Google searches for chicken pox showed seasonal cycles that tracked the annual occurrence of chicken pox in children. By examining data from 36 countries, they found that chicken pox epidemics happen at different times of year in the Northern versus Southern hemisphere. Northern hemisphere countries had epidemics that peaked in the spring (Feb-June), while Southern hemisphere countries had a 6 month shift, with higher chicken pox Google query rates during their spring season (Aug-Dec). Using data from the few countries that report clinical cases of chicken pox, the researchers confirmed that Google query behavior accurately reflected the distribution of varicella zoster (the virus that causes chicken pox) in the population. These analyses highlight that online datasets are a valuable tool for tracking illnesses in countries with access to online resources.

This research provides a powerful and novel method to examine the global seasonality of chicken pox, and provides initial evidence of similar patterns for other childhood infectious diseases." Dr Tyler Stevenson

Dr Kevin Bakker, from University of Michigan said: “Being able to forecast disease incidence is at the forefront of disease prevention and public health efforts. Using Google data, we built a statistical model that could forecast when chicken pox epidemics were going to occur, as well as the relative size of the epidemic. This type of model could be used by public health officials to predict when a severe outbreak may occur.”

Dr Tyler Stevenson said: “This research provides a powerful and novel method to examine the global seasonality of chicken pox, and provides initial evidence of similar patterns for other childhood infectious diseases.

“What we have identified here are clear seasonal cycles in illnesses that can cause significant morbidity to children. We still have a relatively poor understanding of the environmental and internal mechanisms that influence seasonal disease dynamics. Clearly vaccinations are effective.

“In the absence of adequate medical reports and vaccination programs, large-scale data repositories such as Google trends, can be extremely useful for Public Health officials and Epidemiologists to forecast disease incidence in countries that lack vaccination programs.”