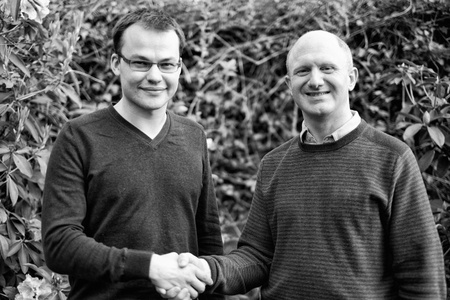 Six of the best performing Economics undergraduates have their achievements recognised.

Chris Weber and Aimee Garner were today awarded the CELMR Shedden prize for their outstanding dissertations in labour economics. They are pictured receiving their prizes from Professor Ioannis Theodossiou, Director of the Centre for European Labour Market Research (CELMR). Hari Szabolcs and Tobias Bulla were awarded the Economics prize as the best senior honours students. Tobias is pictured receiving his prize from Professor W David McCausland, Head of Economics. Ryan Cowan and Hannah Rogasch were awarded the Henry Prize in Mental Philosophy (Political Economy) as the best junior honours students. Professor McCausland said he was very proud, not only of the truly outstanding ability and work ethic of these students, but of the generally high calibre of students attracted to the MA Economics programme now at the University of Aberdeen. Our Economics graduates are highly sought after by top employers in business, government, education, and private consulting. In the latest data from unistats, 100% of our students were either employed or in further study six months after graduation.