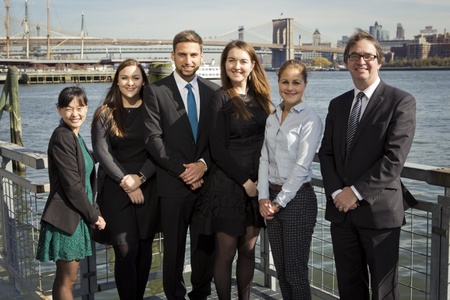 The team reached the final, finishing fourth out of 17 universities, and scooping a prize of $1500 in prize money.

The team beat Cambridge in the first round, who were the only other UK university represented.  Other teams hailed from Australia, Hong Kong, USA and Canada.

The team decided to name themselves MaitlandGroup in honour of late Rector Maitland Mackie.

The students were absolutely thrilled and I was very proud of them. A couple of the judges had Aberdeen in the top two which is huge testament to their performance." Professor Norman Hutchison

Real Estate lecturer, Professor Norman Hutchison, who accompanied the team on the trip said: “The students were absolutely thrilled and I was very proud of them. The standard of presentations was very high. The American universities were very impressive and extremely confident in their presentations but a couple of the judges had Aberdeen in the top two which is huge testament to their performance.”

The teams were given just five days to prepare an analysis of an actual real estate transaction, which was not revealed until the time of the competition.

The teams had to prepare their analysis of the case and make their recommendations regarding the transaction. The finalists presented their case solution to the full panel of real estate experts who determined the winner based on the best overall analysis and presentation.