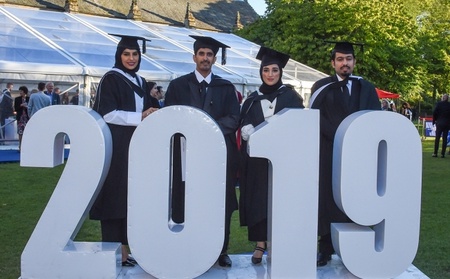 On Monday (November 4) more than 4,500 miles from the Granite City in the sunshine of Doha, a group of students will make a short journey across a stage which will mark their conversion to graduates and a new chapter in the long history of the University of Aberdeen.

The occasion will mark the first degrees awarded at a full ceremony held outside of Aberdeen since the University was founded back in 1495, and is the result of an innovative partnership to expand educational opportunities in the Gulf state.

The University of Aberdeen opened its first international campus in Qatar in 2017 becoming the first British university offering undergraduate and postgraduate degrees within the State.

Operated in partnership with Al Faleh Group for Educational and Academic Services (AFG) it was established with the aim to offer more citizens the opportunity to study without having to travel abroad – a key barrier to further study for many in Qatar, especially women.

The majority of those receiving degrees at the ceremony will be women, with the University welcoming 42 new female graduates and 37 male graduates to the Aberdeen family, which now incorporates more than 160 nationalities.

Although it is thousands of miles from Elphinstone Hall, home to the University’s main graduation ceremonies, much of the tradition which makes an Aberdeen degree ceremony so special will remain.

Degrees will be presented in Latin, gowns and hoods will be worn – and the certificate graduating students receive will show a qualification awarded by the University of Aberdeen.

But the ceremony marks not just the individual success of those moving from graduands to graduates, it exemplifies the University’s commitment to increased internationalisation.

Further opportunities for transnational education have been created with a pre-medical course opening up a gateway for students to train to become doctors in Sri Lanka.

The University’s progress in this area was recognised by the recent Times Higher Education (THE) World Rankings, which saw the University of Aberdeen climb to 28th in the world for international outlook, taking its place among elite universities from across the globe.

And it is looking to the best in the world which has shaped the University’s progress since its earliest days.

The ceremony marks not just the individual success of those moving from graduands to graduates, it exemplifies the University's commitment to increased internationalisation" Professor George Boyne

When the charter of foundation was set down by Bishop Elphinstone in 1495, just four universities existed in the whole of the UK, and so Elphinstone looked outward to Europe and beyond, taking the great European universities of Paris and Bologna as his model.

This tradition continues today. When our undergraduate curriculum, which places employability at its heart, was radically overhauled in 2010 the University collaborated with Melbourne, a world-leader in educational reform.

The University once again looked to Australia in 2017 with the creation of the Aberdeen-Curtin Alliance – a broad collaboration spanning the areas of business, health sciences, medicine, engineering, energy and creative arts.

This unique partnership draws on the strengths of both universities to deliver high-impact research and innovative programmes across all these areas.

Other global initiatives bring the University together with international partners in more targeted spheres of mutual strength. In Engineering, for example, the University has teamed up with Harbin Engineering University in China to promote the development of joint ventures, with an emphasis on civil engineering teaching and research.

But while political uncertainty – brought into sharp focus with Brexit uncertainty – creates challenges, the need for collaboration across the continent and beyond remains as strong as ever, and the University of Aberdeen is committed to playing its part in maintaining and building on these international connections and the mutual benefits they bring. The University was ‘open to all’ at its foundation and remains so today.

* The ceremonies will be live-streamed online, and shown in Sir Duncan Rice Library and Students' Union Building.