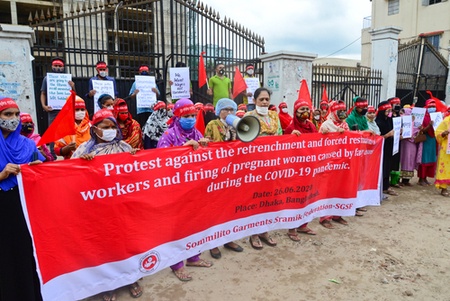 On 24 April the world commemorated the ninth anniversary of the Rana Plaza disaster in Bangladesh — a catastrophe in corporate history. The eight-storey Rana Plaza building contained five garment factories with 5,000 workers making clothes for Benetton, Matalan, Mango, Primark and other major brands. On the morning of 23 April 2013, two-inch-deep cracks appeared in three factory pillars. The following day, 24 April, distressed workers who had seen the cracks in the pillars tried to refuse to start work. The building owner ‘forced’ them to enter the building and work. Later that day, the building collapsed, killing more than 1,100 garment workers.

Growing up in Dhaka, I was surrounded by densely packed garment factories supplying global retailers. Seeing tired workers leaving factories late at night gradually inspired me to be a researcher in corporate accountability and transparency in relation to the lives of those who work in garment factories in Bangladesh for Western buyers. Over the past 16 years I have investigated corporate transparency mechanisms such as social audits and social responsibility disclosures (what retailers and suppliers say and do in their accounts about factory working conditions within the global supply chains operating in Bangladesh). My research with colleagues has found that, despite the social audits that retailers use, workers’ economic and human rights have not improved, while retailers’ revenues balloon and factory owners get rich.

In our prior research, we took a close look at the roles social/factory audits played before and after the Tazreen fire incident (which killed 112 workers in 2012) and the Rana Plaza disaster (2013). During these two major disasters, social audits had been carried out but failed to save workers from factory fire or collapse. Just before the Tazreen fire, US retail giant Walmart had performed an audit that flagged ‘violations’ of its code of conduct but, despite this, it continued to source products from Tazreen until the fire occurred. Until the Rana Plaza collapse, the structural problem of the factory building was less likely to be part of the social audits, and building safety was often overlooked and neglected by the auditors in their audit process. Though the retailers sourcing from factories at Rana Plaza had social audit mechanisms in place, these did not protect the workers from a factory owner who forced them to work in an unsafe building. Our research has found that global retailers and their suppliers often use social audits as symbolic and ritual strategies that help maintain existing inequalities rather than protecting the welfare of workers .

Soon after the Rana Plaza collapse, the global community desperately started fixing factory structure problems and worker safety issues. Two international bodies—Accord on Fire and Building Safety in Bangladesh and Alliance for Bangladesh Worker Safety — have been set up, in collaboration with a number of multinational retailers, to improve the safety of garment factories in Bangladesh. These two bodies have arguably succeeded in putting in place a binding process, with their structural and fire safety inspections. But a serious problem that has remained fairly untouched is forced labour, which is an aspect of modern-day slavery.

Many have ignored the inconvenient truth that forced labour was one of the real causes of the deaths at Rana Plaza. Factory owners forced frightened workers to go into a building in which major, structural cracks had been discovered. The parties responsible for the structural problems of the building were also violators of basic human rights through forced labour. If the garment workers had not been forced into the building, the building would still have collapsed, but fewer workers would have lost their lives. Taking a closer look at the everyday journey of workers at both Tazreen and Rana Plaza, it is obvious that deaths and human sufferings could have been prevented if forced labour (modern-day slavery) had been eliminated.

Over the past 16 years, and long before the Rana Plaza incident, I observed major buyers, including H&M and Walmart, adopt clear codes of conduct and audit tools suggesting ‘zero tolerance’ of forced labour, but such codes and audit mechanisms fail to protect workers. If the forced labour condition was audited well, workers’ freedoms could be ensured and the casualty lists following man-made disasters might be shorter. Unfortunately, forced labour persists and it is responsible for killing and injuring many workers in garment factories.

Forced labour conditions during the pandemic and social audits

Amidst the Covid pandemic, many global retailers (including major UK retailers) started cancelling orders, putting the employment of millions of garment workers at risk in Bangladesh. Factory owners sacked thousands of workers, violating employment contracts. Thousands of workers remained vulnerable and suffered hunger, with little government or international support. In fact, during the pandemic, workers who managed to hold on to their jobs found scope to demand fair pay and advocate for their rights significantly reduced.

How female workers were affected by the pandemic

Our research in collaboration with Traidcraft Exchange, commissioned by the Modern Slavery PEC with the funding of the Arts and Humanities Research Council (AHRC), investigated the impact of Covid on women workers in Bangladeshi garment sectors and found UK retailers’ unfair practices, including cancellations of orders during the pandemic, stimulated exploitation and the forced labour of women workers. The retailers’ cancellation of orders exacerbated interrelated vulnerabilities in economic security, job security, food security, housing security and health and wellbeing, resulting in women workers struggling to support themselves and their families. We also found there was an increase in sexual and verbal abuse and symbolic violence, mainly from line supervisors pushing women to work faster to meet unrealistic production targets.

In relation to social audits, our research found social auditors did not always include women’s rights issues in their audits. We found that around a fifth of auditors had not checked for one or more issues relating to women workers rights. These included compliance with the law on maternity leave, checking if the factories had policies on violence against women, verbal abuse or sexual abuse that were being implemented and verifying if factories had Complaints Committees carrying out their legal duties. In fact, 40% of auditors surveyed did not audit the right to trade union recognition.

What do the findings from the pandemic and Rana Plaza mean for the apparel industry today?

Our findings challenge the existing social audit practices by retailers for improving working conditions in clothing supply chains, as these have failed to protect female workers’ vulnerability, particularly during the Covid pandemic. Social audits as a conventional and voluntary tool can only be regarded as a sticking plaster and not a long-term solution to the poor protection enforced by the Bangladesh state.

In a crisis, whether an accidental fire, a building collapse or a pandemic, forced labour is something that is difficult to audit. Moreover, no audit can change a situation; only when the audit result is acted upon can change occur.

Our research findings show that retailers’ or suppliers’ voluntary social audit mechanisms alone are not helpful to tackle forced labour and uphold workers’ rights. Forced labour and abusive purchasing practices result from the high level of power that big retailers and brands have relative to their suppliers. Our research suggests the UK Government should consider introducing a fair purchasing regulator, a Fashion Watchdog, which could investigate and fine brands and retailers if they were found to breach a statutory fair purchasing code (including human rights code) in their dealings with garment manufacturers, particularly located in the Global South (Latin America, Asia and Africa).

This blog was written by Professor Aziz Islam for Just Style, you can read the original article here.