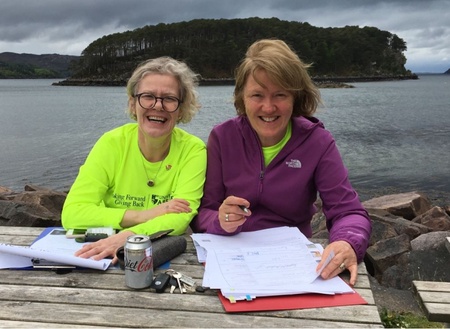 Our intrepid group of cyclists are now on Day 6 of their 500 mile challenge so it is definitely time to turn the attention away from those on two wheels and towards those on four wheels.

Arguably (there is no argument) the most important duo with the team are the fantastic support team of Christine and Rona. Each driving a support vehicle laden down with luggage, sleeping bags, spare parts, bike stands, maps and most importantly tea and biscuits, they are at the heart of the team.

Beginning the day by making sure everyone is accounted for, has eaten a breakfast and has packed their luggage away in the van they then ensure the cyclists set off in, generally, the right direction before taking a well-earned coffee break and ensuring the plan for the day ahead is clear.

The support team then set off with one van catching up with the groups furthest ahead whilst the other takes the final group. The main responsibility from then on is to be on hand should anyone need anything such as rain jackets, spares or more tea (there is a lot of tea being drunk!)

Christine and Rona also seem to be the members of the team being approached by numerous people along the route (the Seggars in Lochcarron, Castle Cottage B&B in Lochcarron, Jean Dawson in Sheildag , owners of the Loch Maree Hotel, Sharlene at the Halladale Inn to name a few) who have been asking about the cyclists, the campaign and on many occasions, making donations to the group’s fundraising total.

Even more important than the logistical side of things, both Rona and Christine provide the positivity that helps keep the cyclists moving. There to chat, have coffee (or tea!) and most importantly provide enthusiasm when the going is getting a little tough,  I know the cyclists really appreciate all that the pair are doing for them.

Events like the NC500 challenge take a great group of people to make them happen but really successful events take a support team like Rona and Christine.