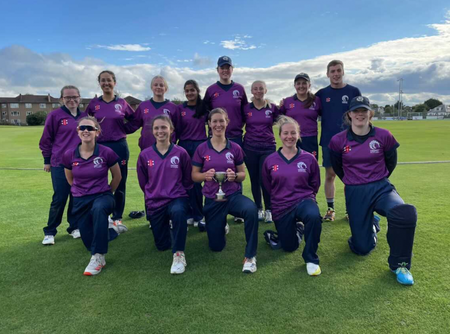 Fourth year Sports & Exercise Science student, Matthew Callow, had a busy summer delivering strength and conditioning support to the Caledonian Highlanders (Regional Cricket development) U18 Girls’ side through Cricket Scotland. A lover of sports, although more used to football, squash and rugby as well as taking part in powerlifting competitions, Matthew had never played cricket before, but had done some groundskeeping at Aberdeenshire Cricket Club. He shared his story with us:

I was fortunate to stumble my way into a strength & conditioning (S&C) internship this summer, really through a bit of luck and an ability to chat to any man and his dog, in this case quite literally.

I was doing some labouring when one my lecturers, Dan, and his dog (Bruce) passed by and we struck up a conversation. I was telling Dan that I’d had a few S&C internships come and go due to the ongoing pandemic and the summer now looked as though I wouldn’t be getting up to a whole lot. Dan, having remembered me as a try-hard during sports practical sessions in first year, suggested the possibility of getting involved with implementing some S&C for the Caledonian Highlanders (Regional Cricket development) U18 Girls’ side. Despite having no experience of playing cricket and very little experience of watching it either, I jumped at the chance to apply some of the knowledge I’ve gained through my own experience, outside reading and university.

For a start this role was quite minimal. I would travel to either Huntly or Arbroath every Friday where I would run a 20-30 minute warm up to prepare the team for their cricket specific work, while also trying to squeeze in the development of attributes that I believe would benefit young athletes in the long run. As I gained some more coaching time under my belt, as well as the trust of Dan and the other coaches involved, the role expanded. The time I was given with the athletes at Friday sessions increased to around an hour, which provided more time for trying to enhance the girls’ performance through use of games, speed drills, agility work, some strength and prehabilitation exercises.

As the season really began to kick off, I was involved in pre-match preparation, something which can be quite unique in cricket compared to other sports. This has multiple reasons, but the biggest probably being that if our team were batting you only have two out of eleven players involved in the game at any one time. Then following a long period of sitting down, there is quick turnaround between innings, where the team swaps from batting to fielding and now all eleven players need to be ready to run, jump, dive as well as highly coordinative skills throwing and catching.

After doing this for the Caledonian Highlanders, I began to do pre-match preparation for one of the sides in the Cricket Scotland Women’s Super-Series, a series of games where the best female players in Scotland were split into two teams, with the series being used to select the Scotland team for World Cup qualifying matches. The series ran over six Sundays, and it was a privilege to be a part of it. Not only was it a great chance to be able to work with highly driven and ambitious athletes, but on a personal level, an opportunity to spend time with some brilliant personalities who I would otherwise never have come across. After playing two matches each Sunday, the series was drawn 6-6, a result that reflected how evenly balanced both sides were and it was probably the best outcome possible for women’s cricket in Scotland.

Having now finished my time with Cricket Scotland, Sundays will certainly be a lot less exciting than they were during this Summer. From an academic and professional view, I gained so much through all the Friday sessions and Sunday matchdays; I feel my ability to apply my knowledge in a practical setting has improved hugely through it all, but mostly the opportunity of working in a sport out-with my own experience has really opened my eyes to a future in sport outside my “comfort zone”.