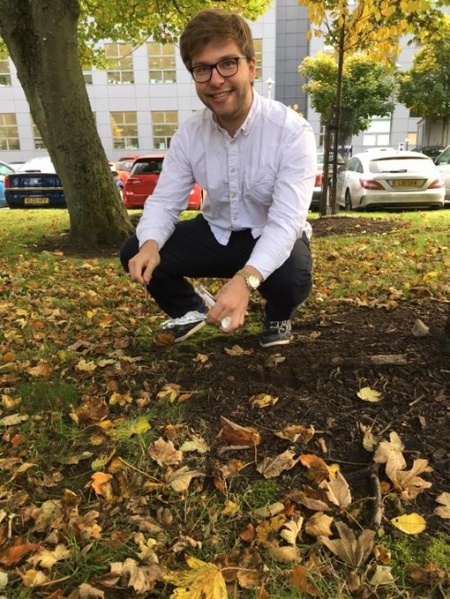 If you go down to the woods today….then it’s likely you’ll run into students on the MSc in Biotechnology, Bioinformatics and Biobusiness (or MSc Bio-cubed) as they take part in an exciting project to sequence their own choice of bacterial genome.

It’s a student-led project – the MSc student isolates the bacterium, chooses the bacterial colony, Gram stains the bacterium with microscope observation and prepares the DNA for sequencing. They then complete the full bioinformatics genome assembly, genome analysis and species identification. All of these are valuable skills for our graduates to have under their belt when applying for jobs in the future.

Once isolated, samples are handed over to our next generation sequencing facility (CGEBM) and the results awaited – will the species be novel? Will it be an antibiotic producer or antibiotic resistant?

Jack’s bacterium turned out to be Escherichia coli, normally a resident of the human gut, rather than soil. Jack has identified a series of interesting antiobiotic resistant genes in his isolate of E.coli and has analysed these using his newly acquired bioinformatics skills.

Jack said: ”It’s been pretty exciting. The E.coli has a gene giving resistance to the antibiotic polymyxin (arnA variant) but lacks other genes needed to boost resistance – possibly the E.coli received the gene (arnA) by horizontal transfer from the other resistant bacteria”.

As part of this student-led project, our other students picked, and sequenced the genomes of a range of well-known soil organisms such as Bacillus species, but also a species of Chryseobacterium, similar to a novel isolate obtained from Himalayan glacier in India earlier this year -  there are amazing things to be found in the woodland next to the Institute of Medical Sciences!