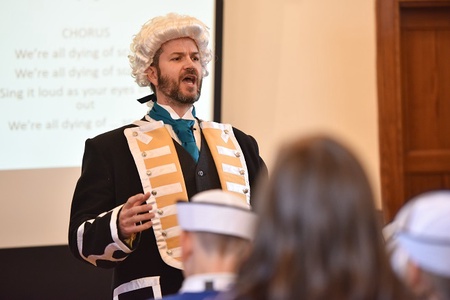 Dr Gordon Fernie and Dr Magaly Alceves from the Health Services Research Unit (HSRU)recently went back in time to demystify clinical trials and explain their importance.

“A Trial at Sea” was a re-enactment for schoolchildren of James Lind’s first clinical trial in 1747, aimed at finding out which medicines worked best in the treatment of scurvy.

Pupils from Middleton Park Primary School’s P5 and P6, and Albyn school’s P4 classes were welcomed on-board our Royal Navy ship on a voyage to the Americas.

The sailors (pupils) were introduced to the ship via a game of Port and Starboard and followed the instructions of Dr Lind to sail the ship (scrub the decks, climb the rigging etc.).

During the voyage the sailors developed the medical condition called Scurvy and we asked them to act out the symptoms. Amongst other things scurvy makes you weak, makes your gums bleed and your skin bruise.

Dr Lind introduced three possible treatments (seawater, vinegar, oranges; NB, there were six in the original trial but we simplified it). Dr Lind described a fair test he designed to find out which treatment is best and gave the each pupil one treatment randomly – this is an important component of a clinical trial.

We taught the pupils a song about scurvy and afterwards revealed the outcomes from the trial which the children were asked to act out. After the role play our HSRU team guided the pupils through the results of the trial.  Who got better? What treatment did they receive?

We finished with an interactive question and answer session to check pupil’s understanding, give some modern day clinical trial examples and give them the chance to ask questions.

We did all this in an attempt to demystify clinical trials, explain why they are important and a public good, as well as to engage with our local community about what our award-winning health services research is all about.

You can watch us in action here.