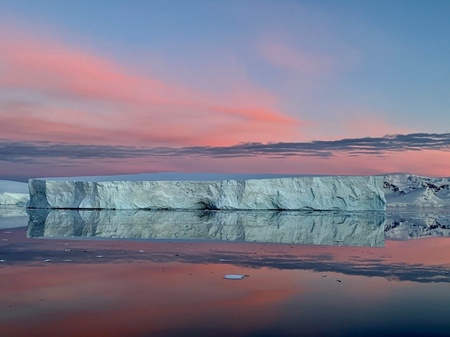 I am one of the newly appointed research fellows at the School of Biological Sciences. Before joining the University of Aberdeen, I was lucky enough to participate in a ground-breaking, global leadership initiative, set against the backdrop of Antarctica, which aims to heighten the influence and impact of women in making decisions that shape our planet, the Homeward Bound Project. This was not only a fascinating experience; it has also allowed me to establish collaborations with researchers worldwide.

As a result of that, I recently co-authored a commentary article published in Nature calling for the immediate protection of the peninsula’s marine environment, through the designation of a marine protected area.  But why should we care about it? We need to protect the waters around the Antarctic Peninsula – before it is too late.

Antarctica, the world’s last true wilderness, has been protected by an international treaty for the last 60 years. But the same isn’t true for most of the ocean surrounding it.

The Western Antarctic Peninsula, the northernmost part of the continent and one of its most biodiverse regions, is particularly vulnerable. It faces the cumulative threats of commercial krill fishing, tourism, research infrastructure expansion and climate change.

The proposed MPA is an excellent example of balancing environmental protection with commercial interests. The area would be split into two zones. The first is designed to protect key wildlife and mitigate specific threats from fishing. The second is a krill fishery zone, allowing for a precautionary management approach to commercial fishing.

Our call came ahead of a meeting of the international group responsible for establishing marine protected areas in the Southern Ocean. We urged the group to protect the region, because delays could be disastrous. Unfortunately, the protection of the waters of around the Antarctic Peninsula will have to wait until next year’s meeting.

In the meantime, you can also help supporting the protection of the waters around the Antarctic Peninsula by signing the Southern Ocean Coalition petition and spreading the word through your networks. Follow us on social media: @Antarctica_NOW

This blog post is a summary of The Conversation piece published last October.