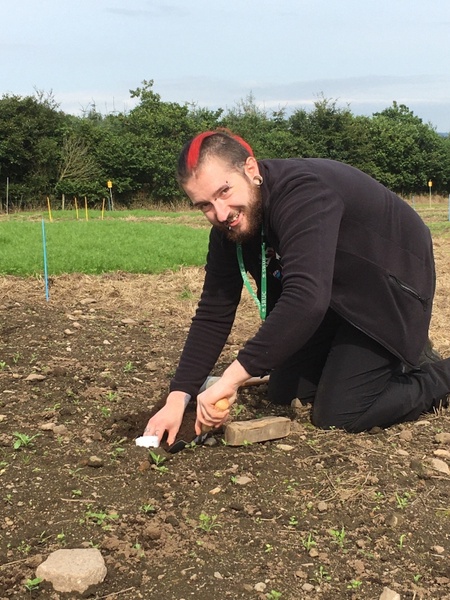 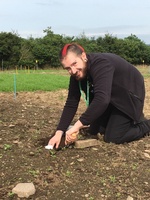 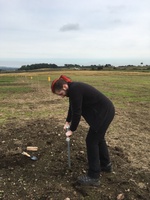 In everyday life, soils are moved from one place to another for construction and mining. I was given a rather unique challenge: moving a 60-year-old field experiment for a housing development. The experiment was of very few long-term experiments exploring soil pH, which farmers and gardeners often manage for better plant growth. This started as an honours project, looking at how moving the soil from one field to another impacted the soil physical properties (such as the density of the soil, how firm the surface and lower layers were to penetrate, and how much water the soil could hold). However, I was lucky enough to also be granted a Stapledon Trust Studentship, so I took on added tasks analysing carbon dioxide and water vapour release from the soil and also how the acidity of the soil played a role. As such, these results have been brought into the project too.

Back in July, a massive 450 tonnes of soil was moved from the SRUC Aberdeen campus to a nearby plot of land owned by the University of Aberdeen. No wonder that when I first looked at the whole scale of the project, it seemed daunting. I had a lot of samples to prepare and analyse for looking at the gaseous flux, and just as many to collect for the comparison! Additionally, I had to take 56 more cores for the physical measurements on top of the 168 I had already collected. On top of that I had to figure out how to use industry standard equipment in short order. Thankfully, with strategic planning and a lot of early mornings I managed to complete everything that I needed to do. It was great fun working in the field and getting my hands dirty like a true pedologist. Professor Paul Hallett was brilliant in explaining the process of collecting soil cores, and likewise Dr Fiona Fraser was a great help from my first day. One important lesson I learned is that soil is deceptively heavy, thankfully I had a vehicle to transport everything that I needed to and from the field!

The Core of Preparation

Let’s just say there was a lot of equipment needed. A suitable mallet, a field load of cores, a core dolly, a penetrometer… My small car had its work cut out! For the cores taken for my studentship, it involved preparing PVC pipe into 10cm long tubes to drive into the ground. Finding a suitable mallet was essential, because any old hammer would likely compact the soil, thankfully there are shock reducing hammers which fit the bill nicely! Additionally, I had to liaise with the staff at SRUC to ensure that there would be enough room in the cold storage to store all the samples before they were needed, and that I knew the timeframe that I had since the field technicians had to prepare and sew the ground soon after the soil had been moved and settled. The staff at SRUC and the University were great in helping me organise time and storage space, and a special thanks to Dr Fiona Fraser for helping prepare the PVC cores.

Breaking Ground, Relevance of the Study

Soil is one of the largest carbon sinks in the world and is a source of incredible diversity of bacteria and fungi. When major infrastructure projects are planned soil is often shifted, sometimes it is deposited locally, but sometimes it enters an entirely new area. Even in agriculture, soil is tilled, mixed, and adjusted for acidity including adding fertiliser. It is incredibly important to see how the physical and chemical properties change, and to understand how this impacts the quality of the soil and its ability to provide a suitable medium for growth, carbon storage and various other environmental services. With the UK, and especially Scotland having ambitious climate goals it is important to see how this can impact the outcomes of the goals.

I learned a lot of useful skills for the profession I would like to work in, such as how to take soil cores properly, how to operate analysis machines and field equipment correctly, and how to properly manage and store samples. I’m very excited to see what the lab results show! Some useful points that I learned for practicality, use small boxes to transport from the field – they’re very heavy to carry on your own (you could say they have high bulk density – a little joke for the soil scientists reading this). Also, sunscreen is your best friend while working outdoors; I’ve got a great tan now, although my sunglasses have certainly added a fun contrast!