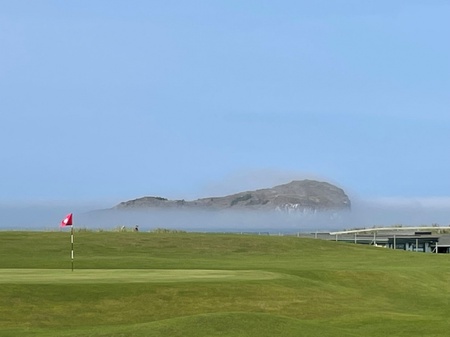 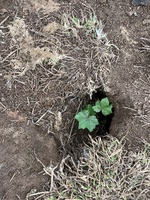 Seabird islands are fascinating places. Their unique ecology means you never know what to expect, as the composition of plants and animals on the island can change dramatically from year to year. Growing up in North Berwick, a town in southeast Scotland, the small island of Craigleith has always loomed just off the shore, so close and yet inaccessible to me. The public are not generally allowed to venture onto this mysterious island so when the chance for me to carry out my Honours project there materialised, I couldn’t resist.

Craigleith has been the home of a large puffin colony for many years but colonisation of the island by invasive tree mallow drastically reduced the number of puffins breeding there. Tree mallow is a biennial plant that can grow in dense stands and its domination of the island prevented puffins accessing their burrows. To combat the spread of this invasive plant the Scottish Seabird Centre set up SOS puffin, a volunteer project to cut and remove tree mallow and allow puffins to return to the island. Over the last decade tree mallow cover on the island has dramatically reduced and puffins have returned to breed in large numbers. But is the reign of tree mallow on Craigleith over? Part of the long-term management plan for Craigleith is to assess whether the tree mallow could bounce back if management stopped - and that’s where my project comes in.

A seed bank is formed when plants drop seeds that become buried in the soil. It acts like insurance against extinction as there is always a supply of potential plants waiting to grow and bolster an adult population that is under threat. My project will be to assess the number of tree mallow seeds in soil samples from the island (the seed bank), we’ll be able to estimate how much tree mallow is likely to grow back in the next few years.

In late August we set off for the island, leaving North Berwick’s harbour behind in the wake of our speedboat which was a thrilling start to the day. With me were my project supervisors from University of Aberdeen (Dr Louise Ross and Dr Helen Anderson), Scottish Seabird Centre experts (Emily Burton and John Hunt) and volunteers, who were there to help cut and remove tree mallow plants . Because I lived close by, I already knew a little about the havoc tree mallow was wreaking on the island. So, on arrival, with the sound of gulls filling the air, I was excited to help remove this mallowy menace but for most of the day I was collecting my soil samples.

I used a soil corer to sample specific GPS points all over the island. Screwing the corer into the dense ground was tough and I definitely got a free workout. I also measured other factors at each point such as soil moisture, soil depth and signs of rabbit activity. These factors will be useful in determining potential causes of variation between the samples, and why the seedbank may be different this year to years previously sampled.

The time I spent on the island was beautiful, educational and inspiring. The people I met and wildlife I saw will stick with me forever, as will the story of greater black backed gulls sadistically turning puffins inside out before eating them. Now the fieldwork is done, I can’t wait to get into the lab and get going with the rest of the project. Hopefully, it will help us learn more about the island’s ecology and what else we can do to help the puffins.