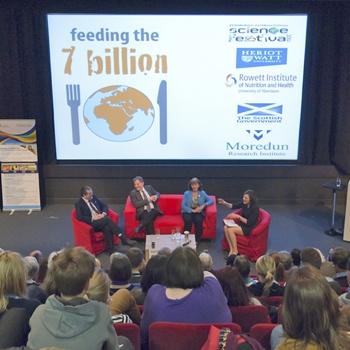 A lively debate between leading scientists and the general public took place at the National Museum of Scotland on Tuesday 3 April as part of this year’s Edinburgh International Science Festival. The debate focused on the challenges of Global food security: with the world’s population predicted to reach 9 Billion by 2050 and a finite amount of land available for growing food, it seems that our natural resources, land, water and energy are in limited supply.

The event started with getting the audience’s view on what they understood by the term Food Security, followed by a brief film capturing the views of people on the streets of Edinburgh. The three panelists then gave brief presentations covering some of the challenges we face such as: the demand for food is expected to rise by 70% in 2050 to meet the anticipated global population growth while at the same time the amount of land suitable for food production will decrease. Therefore we need to develop sustainable and efficient methods of food production that minimize impact on the environment.

Food shortages and subsequent price rises have also resulted in civil unrest and riots in a number of countries around the world. A recent UN report also highlighted the issue of while one sixth of the world’s population are undernourished a similar number are estimated to be obese. Other issues touched on by the panel included unequal access to food, consumer choice and dietary shifts, pressures on available agricultural land, climate change, loss of biodiversity, food pricing and trade agreements and the increased threat of disease risk to crops, animals and people in an increasingly crowded planet.

Professor Peter Morgan commented,” Sustainability has to be the underlying principle for food security. It has been calculated that if everyone on the planet used the same natural resources as we do in the UK to feed ourselves then it would take three planets to sustain ourselves”

Professor Julie Fitzpatrick commented, “ Food security is a global issue and we will need to work together to increase the sustainable efficiency of our food production. New advances in research and technology can be applied to help us achieve this e.g.: development of vaccines to prevent disease in food animals thereby increasing their biological efficiency, health and welfare and reducing waste”.

Professor David Hopkins commented, “The challenge we currently face is that there will be no one solution to deal with this issue we will have to work together in collaboration with other countries across the world to look at food production, nutrition, distribution, consumer choices, markets, trade agreements and reduction of waste”.

The audience asked the panel questions on a number of wide ranging issues which included:

Feedback from the audience after the event found that more people were now aware of the global issue of food security and had enjoyed the opportunity to have a debate with the expert panel on what some of the challenges are and potential solutions might be.

Some of the younger members of the audience felt that the issues discussed were of particular relevance to them: Poppy Mulligan (aged 16), “Food security was not something I had heard much about and I feel that younger people need to take a more active role in trying to come up with potential solutions to these issues as we are the ones that will have to live with the consequences in the years to come.  I will be half way through my life when the population will reach 9 billion”

Professor Lee Innes, Communications Director of the Moredun Research Institute commented, “This is the first of several public engagement events on the subject of Food Security that will be taking place in different locations and venues around Scotland to help raise awareness of the issues and provide the opportunity for debate and discussion on a topic that will affect us all. The next debate will take place on the 8th September in Aberdeen at the BA Festival of Science”.