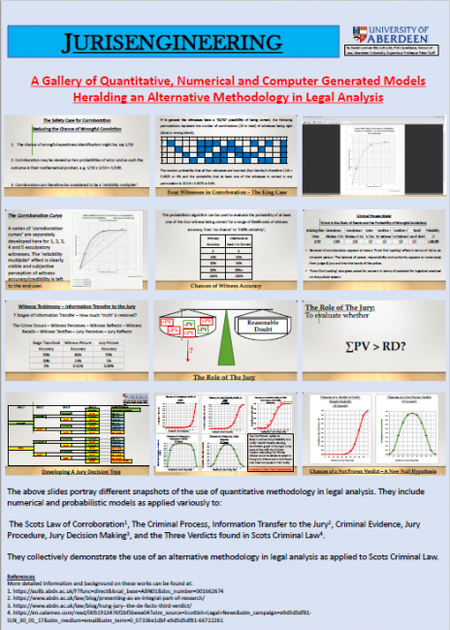 University of Aberdeen PhD candidate David Lorimer applies a quantitatively analytical approach to criminal law. He has written previously on jury analysis and the admissibility of prejudicial evidence (with a journal paper currently under peer review). The attached poster indicates some of the areas to which his quantitative methodology has been applied. In this blog post he indicates how his work led to similar conclusions to research featured in a recent article in 'The Times'. He highlights two key legally problematic factors which substantiate the Times article's empirical research findings from a more analytical perspective.

'Academic suggests abolishing juries in rape trials'. So ran the headline of a recent article in the Scottish Legal News. Having proposed the same thing as one of the outcomes of my PhD candidate Capstone Project over six months ago and further suggested it in the course of presentations at this year’s BILETA Conference, I wondered if SLN had somehow tapped into my as yet unpublished findings. It turns out however that SLN were referring to another academic who was quoted in The Times in an article entitled ‘“Support building” for proposal to ditch jury trials in rape cases’. Interestingly the researcher is quoted as using anecdotal evidence from police officers and barristers to claim that there is ‘a disproportionately high number of acquittals in “acquaintance rape” cases, in which the assault was allegedly carried out by a person known to the victim’ and that ‘many “believe there is something about these cases that fail (sic) to get convictions”’. The Times further quotes the researcher as concluding ‘...the law around rape and the public perception of rape are two separate things and that’s why jurors are failing to convict’, leading to the proposal that: ‘Judges should hear rape trials alone in a bid to combat jury bias and unwarranted acquittals’.

My own conclusion, that both judge and jury could be replaced by a tribunal of cross-disciplinary expertise in rape cases, was borne out of less ‘empirical’ and more jurisprudential analysis, albeit with a measure of quantitative abstraction (a combined analytical approach which I have described as ‘Jurisengineering’). My analysis is essentially a critique of the idea that probative value can somehow directly outweigh prejudicial effect (PV>PE for short) leading to the conclusion that the law effectively draws a jurisprudential veil over prejudicial effects in jury decision making and evidential assimilation. Such summary description only hints at the depth of analysis involved, so perhaps if I briefly apply a similar approach to analysing the research described in The Times, the reader will get an idea of how ‘Jurisengineering’ led to similar conclusions.

‘...(M)any “believe there is something about these cases that fail (sic) to get convictions”’

Much of my analysis of ‘PV>PE’ concerns admissibility, as PV>PE is an underlying guideline wherever the law allows a judge to admit potentially prejudicial evidence. So what prejudicial evidence becomes generally more admissible in ‘acquaintance rape’ cases? Clearly the opportunities for adducing Sexual History Evidence are greater in such cases, as ‘stranger rape’ by definition means there is no sexual history between the parties and the ‘stranger’ would not typically be aware of the sexual history of the complainant (or, in Scots legal terminology, the complainer). The mere introduction of the idea that the complainant has any sexual history at all may cast her in a different light in the eyes of the jury and the more that sexual history is explored the more likely it is that a prejudicial effect will ensue. Thus defence counsels have additional means of developing prejudicial effect against the complainant in ‘acquaintance’ cases, a means which the adversarial system not only permits (despite Rape Shield constructions) but practically demands should be invoked wherever possible.

Another prejudicial trope that defence counsel will tend to invoke against a complainant, wherever possible, is lack of any evidence of physical resistance or injury. Such evidence is more likely to be found in ‘stranger rape’ cases where aggression and physical force is a feature.

These are just some of the things about these cases that might cause failure to get conviction and may lead to a higher rate of acquittal in ‘acquaintance rape’ cases.