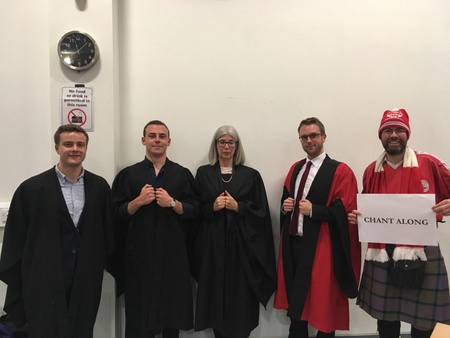 A number of our students have been involved in the annual Staff v Student Moot over successive years. Hear their perspective on the event and how this has developed during their involvement in the moot.

This year’s highly anticipated Staff v Student moot has been described as “the best in living memory”, “a night to remember”, and “what actually happened”, all at the same time. It is an event that showcases the pinnacle of student advocacy and legal skills against whatever the staff have dreamt up in nervous hours leading up to the annual showdown. Malcolm Combe (Staff v Student Moot 2011 survivor, bedecked in a kilt and a 1999/2000 Aberdeen FC home strip) and “fresher professor” Dr. Alisdair MacPherson entered the bear pit to defend ‘don’ pride and the construction of their new stadium at the leafy location of the Taylor Building, home of the Law School and the Law Library. Advocates and legal eagles Benjamin Jones and Neil Johnstone put up a strong fight in opposition, with Lady Anne-Michelle Slater presiding and "Moot of the Day" punditry being provided from the sidelines by Tom Mackie and Justine Weon.

The legal arguments of the parties were rooted in bagpipes, the classical works of Georges-Pierre Seurat and an Evil International Bakery Conspiracy. This resulted in quite an interesting wrestle of intellect and legal stamina between the staff and the students which, ultimately saw the staff take the cup home. So give mooting a go!

A university society’s opening event of the year often sets the tone for the year ahead, particularly for first year students who have hitherto had no experience of that society. Ever since I joined in first year, I knew that I was interested in joining the mooting society, but it was the Staff v Student moot, which I attended while still feeling the effects of Freshers’ week, that truly cemented my interest in the society. It conveyed to me a society full of ambitiously aspiring lawyers who all have a sense of humour, but who can also get on with professors (when not mooting).

Praise must be paid to Professor Bain for writing the problem question each year. It is with his abstract, original and often unusual scenarios that have made the Moot Soc’s opening annual event such a success. From duels in the well of the court to accusations of Scottish Government collusion with North Korea, each year’s entertainment all originates from Professor Bain’s creative conundrums!

The Staff v Student moot is a truly wonderful event that encapsulates all that the society stands for. We enjoy the long and arduous preparation to simply speak for 10 to 15 minutes at a judge, while also drinking wine and mocking professors. While this may not be a common occurrence, it should be.

But after five years at the university, I can safely say that the Mooting Society have always been a wonderful group to be involved with. Gaining a hands-on and applicable experience to the law is invaluable. Acquiring the confidence to speak in public, which is something I have always struggled with, has brought me great satisfaction. And obviously it looks quite good on the CV!

The 2017 Staff and Student teams and judge

Certain parts of the Staff v Student remain unchanged. There is the ceremonious bribe of the judge, the Staff’s luxurious red robes, and all parties consuming their weight in Society-sponsored wine.  The Staff have won on three occasions, with one draw. Despite this the myth perpetuates that the staff win each year, leading students to believe the moot is rigged from the start, but staff maintain that it is their skills which result in the win each year.  However, it is the antics of the moot itself which draws students and staff alike to lecture halls after a long day of teaching.

The last five years have been some of the stranger of moot problems.  When asked, students rarely remember legal arguments, but will be able to pick out memorable phrasings or events.  The 2014 Staff Student moot saw a duel between staff and students, with an out-of-court death bringing the moot to a swift close. The next year was certainly less dramatic, but submissions took hard hits at the teaching standards at the University.  Questions were tossed around about inadequate lectures, facilities within the Law School, and the dedication to studies from students themselves.  In 2016, pop culture took over the moot court. The staff donned fezes and went on about Harry Potter fans and the rivals of Doctor Who taking over King's College. Admittedly, the students were not the most impressive that year -no one remembers exact arguments, but everyone is in agreement that it was a strange night and the efforts of both teams did not disappoint.  Professor Bain’s theatrics returned last year and tested the dramatic abilities of law students (safe to say none will be receiving any acting offers soon). Surprisingly, law was actually used to discuss whether a person could be considered “dead-dead” or just “dead”, and real zombies were brought in to confirm this theory.

It was the events of this year which has led many to say that this Staff Student has been the best in recent memory. From an organisational view, it was a miracle that everything went the way it was supposed to. There were no practices, and neither side knew what to expect from the other.  We had filmed sections for instant replay, but had no idea where they would be used.  No one told us there would be bagpiping and singing. These were only topped by Neil’s attempt to explain planning law.  In fact, no law was involved, whatsoever, in any capacity: this was despite Lady Slater's repeated requests that relevant planning law was brought before the court; only Malcolm Combe managed a token reference to the Town and Country Planning (Scotland) Act 1997.  In our opinion this lack of law was the reason the moot was one of the better ones!