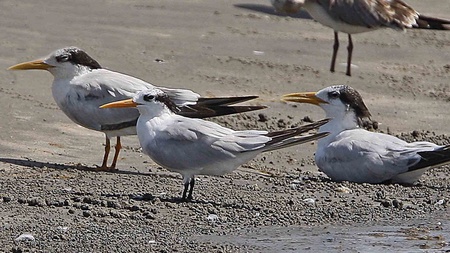 Scientists and conservationists say they have identified a 'new' species of bird.

The Royal Tern, a large, tropical, fish-eating seabird with a bright orange bill, was previously thought to have two subspecies – ‘maximus’ (found in the Americas) and the ‘albididorsalis’ (found in parts of West Africa).

But wildlife conservation teams in The Gambia long-suspected that the West African birds were distinct, and now scientists at the University of Aberdeen have used DNA analysis to show they are not subspecies of the same bird but two distinct species.

The discovery could have immediate conservation consequences for the West African Royal Tern as its population is threatened by the eroding of its breeding grounds due to climate change and human activity.

They have also shown that the West African Royal Tern is more closely related to the Lesser Crested Tern, which is a lot smaller and has a yellow bill.

The findings have been published in the Biological Journal of the Linnean Society.

The research will be presented to international conservation authorities in a bid to have its conservation status re-evaluated.

Scientists at the University of Aberdeen, in collaboration with those from universities of Montpellier and Hull, made the discovery by analysing DNA sequences of feathers and other remains of West African Royal Terns from Mauritania and from islands off the Tanji Bird Reserve in The Gambia.

It is the first time anyone has ever sequenced the DNA of the West African Royal Tern.

The process allows them to compare a bird’s DNA sequence with every other bird that has been studied in this way using online tools with software able to establish a bird’s closest matches.

The resulting search revealed the West African Royal Tern’s nearest relative was not the American variant, but the Lesser Crested Tern – a very similar bird which is smaller with a yellower bill.

“West African and American Royal Terns have long been considered the same species,” explains Professor Martin Collinson from the University of Aberdeen’s Institute of Medical Sciences. “They look pretty much identical to each other, except the American Royal Tern is on average slightly bigger with a slightly redder bill.

“It’s information that can inform conservation priorities. There is a limited pot of money and information such as this helps determine where it should be allocated. It is important to direct conservation funds to preserve the maximum amount of genetic variation and genetic biodiversity, in addition to understanding the inherent societal, cultural and economic importance of the birds themselves.”