Staff within this theme possess expertise in a wide range of palaeoenvironmental techniques including:

The range of palaeoenvironmental techniques that we use are supported through the development of geochronologies which are established largely through radiocarbon (14C) and lead (210Pb) dating. Geochronologies show the age of sampes and allow us to reconstruct how past environments have changed through time.

Subsampling of peat sediments extracted from the Falkland Islands in preparation for palaeoenvironmental analysis. 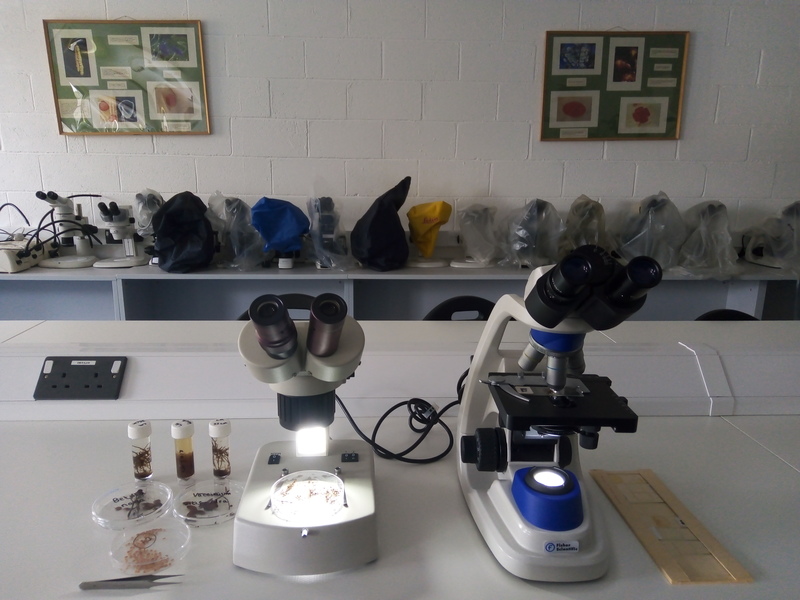 Over the last two decades or so, the greater part of the palaeoecological research has had a geographical emphasis upon Scotland, the North Atlantic, and Scandinavia. Our research however, also covers a much wider geographical area including Spain, South Africa, South America, Russia and the Falkland islands.

Some examples of our recent research projects:

Photos: Views across a Falkland peat bog and some of the island residents - a sealion and gentoo penguins.

Sediment samples were extracted from the Falkland islands for macrofossil, testate amoebae , charcoal and carbon content analysis as part of a Leverhume funded project entitled ‘Falkland Island peatland as a mirror to understand Future European peatlands’. Directed by Dr. Dmitri Mauquoy. Peatlands are valuable ecosystems which take up and store carbon, mitigating the effects of climate change by taking greenhouse gases out of the atmosphere. One of the consequences of recent climate change and human disturbance is that peatlands are now becoming more fire prone due to drainage, higher summer temperatures and reduced precipitation. The aim of this project is to understand the relationship between long-term peatland carbon accumulation rates, burning disturbance, the types of former peat forming plants and climate change across the Falkland Islands. The analysis will help us to understand not only the impacts of climate change to Falkland peatlants but also how such peatlands in the Northern Hemisphere may likely change in the future.

Photos: Boat trip from Oban to Mull and examples of peat coring on Mull

On the island of Mull sediment cores were extracted from different locations using a Russian peat corer for fossil pollen analysis. The aim was to reconstruct the vegetaion history to determine the different types of native woodland that may have once been present thousands of years ago, but which are no longer present today, inorder to help local communities restore the native woodland on the island.

Photos: Photo 1 is just before climbing into a very wet valley mire to extract sediments for fossil pollen and geochemical analysis. Photo 2 - From Historic Environment Scotland - A symbol stone located next to an early Medieval Pictish enclosure. 3- Photo: Fossil pollen from Plantain (a herb)

Fieldwork was undertaken at Rhynie in Aberdeenshire, eastern Scotland as part of the ‘Early Medieval Comparative Kingship project’. Sediment samples were taken from the valley mire for geochemistry and pollen analysis to investigate how environments changed as early Medieval kingdoms in Scotland took shape. The study site is located only 500 m away from a Pictish fortified settlement, on the adjacent hill 'The Craw Stane complex' occupied between the 4th to the 6th centuries AD. The investigation revealed a landscape rich in natural resources for the local inhabitants, but also a landscape used for arable and pastoral farming, and interestingly despite the settlement abandonment in the 6th century AD arable farming continued nearby until recent times.

We also maintain links with The James Hutton Institute and a range of UK and International colleagues whose interests span a variety of disciplines including:

What is your Research about?

The research questions vary depending on the project although most of my research is focussed on human-environmental interactions. In South Africa, we investigated impacts of land degradation, environmental stress and landscape recovery in semi-arid regions. I am particularly interested in detecting trace metals and identifying evidence of past mining. Currently I am part of an exciting interdisciplinary research team ‘the Comparative Kingship project’ which brings together experts in archaeology, history and geography (palaeoecology). The palaeoecological side of the research explores how and why environments changed as the early Medieval kingdoms of Scotland took shape and we have so far published our finding in Environmental Archaeology, The Holocene and Quaternary Science Reviews.

What is your Research about?

My research involves the assessment of environmental/climate change using macrofossils and other palaeoenvironmental datasets from peat-bog deposits. Past research projects include 1) the refinement of 14C wiggle-match dating to generate accurate & precise chronologies, in collaboration with international colleagues from the Universities of Amsterdam, Uppsala & Belfast 2) a 3 year NERC joint standard grant ‘Palaeoclimate reconstructions from Tierra del Fuego to detect land-ocean-atmosphere interactions’ from Argentina'. The research involved reconstructing the timing, magnitude & spatial pattern of long-term climate change, as well as investigating other variables such as changes in atmospheric & ocean circulation, & solar variability during the last ~2000 years. 3) I am currently working on a Leverhulme funded research project entitled: ‘Falkland Island peatland as a mirror to understand Future European peatlands’ The aim is to explore the relationship between long-term peatland carbon accumulation rates, burning disturbance, the types of former peat forming plants and climate change across the Falkland Islands, to better understand the impacts of climate change and how peatlands in the northern Hemisphere may likely change in the future.

What is your research about?

My research involves the identification of fossil pollen and the use of other associated proxies (such as microscopic charcoal, fungal spores, radiocarbon dating, and peat geochemistry) to reconstruct past environments which can then be used to explore vegetation change, succession and human-environment relationships between the prehistoric through to the late Medieval period. My core research activities are focused upon the use of pollen and other associated proxies to determine environmental impacts resulting from the Viking/Norse settlement of the islands of the North Atlantic, particularly Greenland, and to investigate ‘landscapes of interaction’ featuring contact between the Norse, Sami and Thule Inuit peoples. I am also interested in vegetation history and plant succession which can contribute to future conservation models and am currently supervising a number of PhD projects where conservation is at the forefront of the palaeoenvironmental research.

Current Project: 'Comparative Kingship project'  a Leverhulme funded fellowship, directed by Prof. Gordon Noble. The aim of this research is to investigate how environments changed as the early Medieval kingdoms of northern Britain and Ireland took shape during the first millennium AD, with particular focus on how societies were impacted by change (e.g. arrival and departure of the Romans, the rise of power centres, the impacts of Vikings on native communities....). To achieve this a number of sites are being analysed in Scotland and Ireland using high resolution C14 dating, pollen, other micro-fossils and geochemical analysis.

PhD project: 'The palaeoenvironmental history of ancient deciduous woodlands in Scotland and Ireland, with particular emphasis on sub-canopy layers' (click on the link to read more)