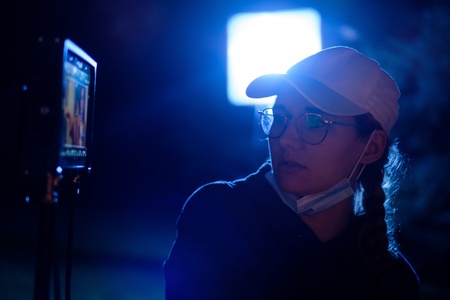 The role of women in front of and behind the camera will come under the spotlight during Dark Nights, Aberdeen's new film festival which gets underway next month.

Jamaica-born actress Martine Beswick joins the packed ‘Shaken Not Stirred’ panel at the James Bond: Past, Present and Future event on Friday, March 4. Beswick made her mark on the 007 franchise with a memorable sequence in ‘From Russia With Love’ opposite Sean Connery and was asked back for a more sizeable role in ‘Thunderball’.

Also known for featuring in such Hammer classics as ‘One Million Years B.C.’ and taking on a part for Oliver Stone in his directorial debut ‘Seizure’, she will discuss her varied career at the event alongside legendary franchise editor John Grover, whose resume includes 2001: A Space Odyssey as well as such classic Bond films as The Spy Who Loved Me, Octopussy, The Living Daylights and Licence to Kill. Completing the panel is award-winning cinematographer Phil Meheux whose work in the 007 universe includes the classics GoldenEye and Casino Royale.

Added to the Dark Nights programme is a screening of the internationally award-winning short film ‘The Great Conjunction’ by Czech filmmaker and University of Aberdeen alumna, Karolina Smolova. Her film is a captivating story about Kenneth, an ageing astronomer who plans to watch the Great Conjunction of Jupiter and Saturn. His plans get disrupted by his teenage granddaughter and what was meant to be a magical night turns into a shocking discovery that changes Kenneth's life forever.

Of her time in the North-east, Smolova said: “My experience at the University of Aberdeen has been essential both to my career growth and development as a filmmaker. I was fortunate enough to always be surrounded by talented and enthusiastic students, great friends, not only from the film and visual culture department but from all faculties of the University.

“This led us to make a short film 2035 in the final year of my studies, and this project was the first stepping-stone for my career as I decided to pursue further education and dedicate myself fully to filmmaking and mainly to directing.”

The screening of her film takes place at 1pm on Friday, March 4, just ahead of a spine-tingling screenwriting workshop with Glasgow screenwriter Sergio Casci, who scripted the modern slice of Hammer macabre ‘The Lodge’.

We are delighted to be adding two more attractions to the Dark Nights programme, one an experienced and much-loved screen legend who has worked with some real titans of the industry, the other a unique work from a talented young filmmaker at the start of her career." Dr Calum Waddell, lecturer at the School of Language, Literature, Music and Visual Culture

Two other screenings will take place during the festival. Scottish actor Ian McCulloch will share his thoughts in a talk at King’s College on March 5 after a special showing of the controversial 1979 shocker ‘Zombie Flesh Eaters’, in which he starred.

Edinburgh-based author Jonathan Melville will also be present to answer audience questions after a screening of the seminal British film Highlander on March 5, with a focus on his epic book that covers the entire production history of the Celtic fantasy action-adventure.

Organised by the University of Aberdeen, Dark Nights is the first in a series of new festivals the University is hosting in 2022. The full programme, ‘UNI-Versal’, will see a raft of events focused on new ideas, Scottish heritage, culture and music take place throughout the year.

Open to all, the festivals are part of the University’s commitment to supporting the city region’s recovery from Covid-19.

Dr Calum Waddell, lecturer at the School of Language, Literature, Music and Visual Culture, said: “We are delighted to be adding two more attractions to the Dark Nights programme, one an experienced and much-loved screen legend who has worked with some real titans of the industry, the other a unique work from a talented young filmmaker at the start of her career.

“Their talent, creativity, successes and challenges span the decades, bringing a joyful celebration of the work of women artists in the industry to the festival.”

The full film festival programme can be found on the University website. Booking is required for both free and paid-for events.